A few weeks ago, I answered a question on Quora, “Does anyone besides Indians watch Indian movies?”  This post is adapted from the answer I gave.  At first I gave a brief answer, but then people commented and wanted to know WHY?  Why would a non-Indian love Indian films?  Many commenters were at first incredulous, but then thanked me for showing them an outsider’s view of their cinema.   As of this writing, the answer has garnered over 170,000 views, and made me a Most Viewed Writer about Bollywood on Quora.  (Which still blows my mind.)

Netflix in the US has over 80 Hindi films at anyone time.  Because of the kind of films I enjoy, Netflix recommended I watch Dilwale Dulhania Le Jayenge about 2 years ago.  Since I fell in love with Bollywood, I’ve seen over 200 Indian films.  I’m lucky that in my area new release films play in a few local theaters.  I was able to see Kapoor and Sons just last night and I absolutely loved it.

I’m not the only non-Desi in America to love Bollywood movies, but I wouldn’t say it’s very common.

My father’s church has a monthly movie night, and he asked me to show a Bollywood movie last week.  I chose Dil Se, and showed it to 15 people, including my parents, who had never before seen a Bollywood film.  They all loved it!

Editing to add my answer from the comments below, WHY I love Indian films:

I also love old Hollywood musicals like Fred Astaire/Ginger Rogers and Gene Kelly films.  Hollywood does not make them anymore.  I love the singing and the dancing in Indian cinema, but also the earnest love stories are not the kind of films that Hollywood makes either.  Rom Coms are becoming rarer and rarer in American films which tend to be more cynical.  The emotions in Bollywood films are something that is rare to see in Hollywood or English films.  People joke about how much Shahrukh Khan cries in his films, but I really respond to the emotions shown in Indian cinema.  Also, the colors on screen!  Bhansali’s film Ram-Leela is an example of this. 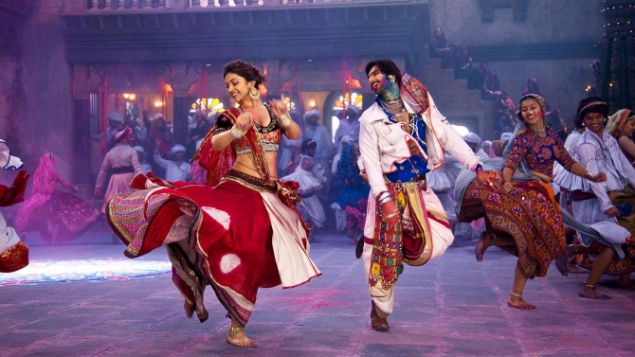 I listen to Bollywood music all the time, as well.

Indian films just give me things I cannot get from Hollywood or other Western cinema.  Plus Shahrukh Khan.  I’ve watched 47 of his films alone (which doesn’t count the countless times I’ve watched DDLJ.)  🙂

I do love South Indian films as well, and I have seen a little over 30 South Indian films.  I fell in love with Prabhas after watching Baahubali last year (four times in the theater!).  I now own many of his Telugu films on DVD.

Recently, I’ve been watching quite a few Malayalam films, especially recent ones with Nivin Pauly and Dulquer Salmaan.  I have watched fewer Tamil films, but I asked my neighbor to bring me back some DVD’s from her recent trip to Chennai, and have been working through the dozen films she brought me.  Last week, I watched Raja Rani, and liked it.

For those interested, I keep track of all the Bolllywood films I’ve watched on Letterboxd.com, and here’s my list of Regional films I’ve seen, up to 32 now after watching the Malayalam film Classmates last night.

I asked for commenters to recommend their favorite Indian films — and oh boy, did they.  I’ve created a Letterboxd list now of all the films recommended there in the comments that I have not already seen.  Now up to 372 (!!) films in several Indian languages:  Hindi, Tamil, Telugu, Malayalam, Kannada, Marathi, Punjabi, etc.  The question now is will I live long enough to watch even half of them!

My first Bollywood film ever was Lagaan, back almost 15 years ago when it was nominated for the Foreign language Oscar.  That was back when you could only rent Netflix movies via DVD in the mail.  I then watched Dil Chahta Hai, because that also had Aamir Khan.  But it was not so easy back then for a non-Hindi speaker to find out about other Bollywood films.  The internet has helped so much, and Netflix’s recommendation engine is the reason I fell in love with Bollywood 2 years ago.  DDLJ was recommended to me, then I was able to watch Rab Ne Bana Di Jodi right after that.  I texted my Indian next door neighbor for other suggestions, and she loves Hrithik Roshan and Zindagi Na Milegi Dobara was also streaming on Netflix and I was off to the races with my new obsession.

I have been mentored by two other non-Desi lovers of Bollywood who then suggested many other films for me to try, and in some cases pushed the DVD’s into my hand saying, “YOU HAVE TO WATCH THIS!”

Kathy Gibson of AccessBollywood.net  and Margaret of DontCallItBollywood

Shout out also to the gang at Bollywhat forum!

One thought on “Why I Love Indian Cinema”