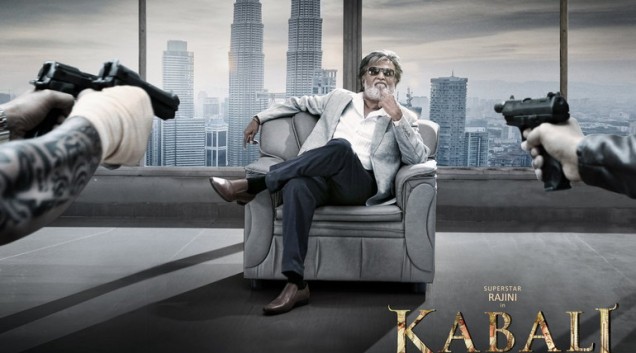 Kabali is my second Rajnikanth Tamil film.  I previously watched Enthiran (Robot) which I really enjoyed.  You can tell right away that Rajnikanth is a Star with a capital ‘S’.  My South Indian neighbor told me that Rajnikanth modeled himself on Clint Eastwood.  He wants that kind of “Make My Day” iconic style.  It has been two years since the last Rajnikanth film, and since 1994’s Baasha that he has played a Don role.  If you have any doubt what an event a Rajnikanth film is, they marketed Kabali by painting a plane! 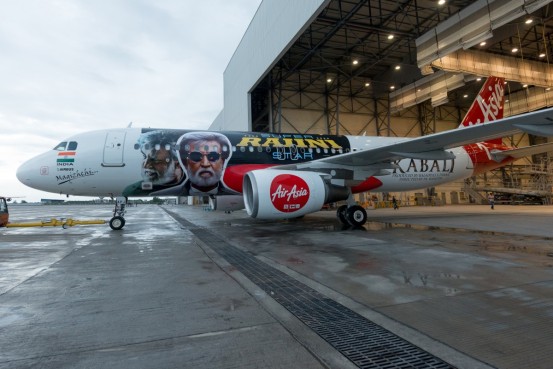 I saw Kabali twice this week.  The first time was a late night show that didn’t get out until 1:30 a.m.  I was tired going in and bleary which wasn’t good.  And I didn’t have the raucous whistling crowd that I hear is more typical for a Rajnikanth film experience.  I thought it was a decent gangster don comeback story, and appreciated Rajnikanth’s style and flair.  But I didn’t really get what the movie was trying to show me until I read Margaret Redlich’s analysis and review on Don’t Call It Bollywood.

I knew zero about the Tamil community in Malayasia, the setting for the film and their history of oppression.  What Margaret pointed out is that this film is telling you a story of an oppressed people between the lines, skirting the censors (in Malayasia they were required to add a crime doesn’t pay disclaimer.)

On the surface, this is a story like many we’ve seen before.  A gangster Don is released from prison after 25 years, and takes revenge on the rival gang that killed his pregnant wife and his mentor, and who framed him for fomenting a massacre.  The Tamil speaking policeman warns him to mend his ways when he gets out, and not to disgrace the Tamil people.

His loyal aide Ameer picks him up from prison, and shows him how Kuala Lumpur has changed and how the opposing gang 43 has taken over.  Kabali directs Ameer to take him to the secret hangout of the gang, in the back of a pet shop.  And this starts the Kabali Rajnikanth signature moves.  Kabali is always dressed well in a suit jacket.  And when he confronts one of the leaders of the rival gang he makes a point to sit in front of them in a relaxed manner with crossed legs.  It’s show of nonchalance, and that he demands respect. 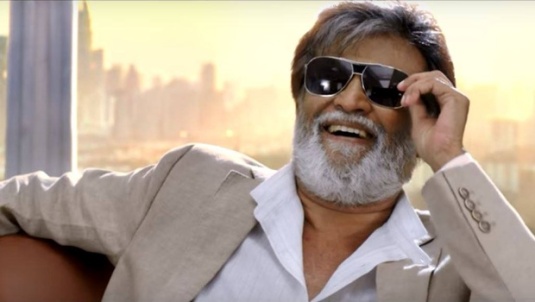 Kabali fights with swift moves and hidden pipes in his sleeves and objects he picks up around him.  He strategizes  and is a step ahead of his rivals.  The action fight scenes are fun and inventive.  Pretty bloody at times.

Ameer then shows Kabali the school that he and Kabali’s followers have created to save kids from gangs and other charitable foundations.  Kabali finds he feels connection to a young drug addict girl student named Meena.  “She’s about the age that my son or daughter would have been.”  I’m not sure I’ve ever seen the dark side of youth drug use as presented like this in an Indian film before.  It’s also really interesting that Meena is shown as a redeemable character, and that our hero wants to adopt a drug addict. 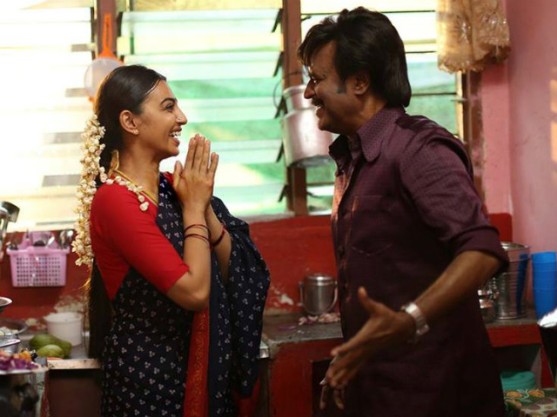 There are two really great strong women characters in this film.  As Kabali addresses the graduating class of the school, we flashback to his backstory with his wife, played by Radhika Apte, who I had only previously seen in Badlapur.  I absolutely loved their relationship of equals.  They meet as field workers, and she encourages him as he rises from labor organizer to the protege of the TamilNesan leader played by Nasser.  And then, there’s Kabali’s daughter: 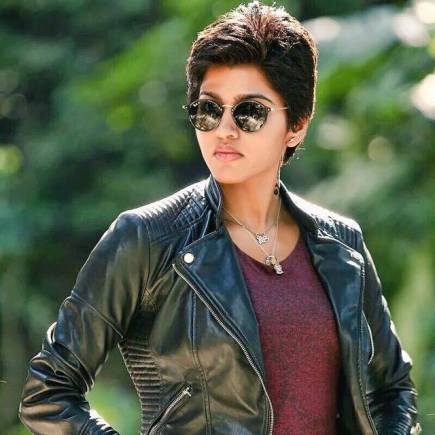 Dhansika was all kinds of kick-ass awesome as the assassin for hire Yogi.  I’m looking forward to seeing more of her work.

I enjoyed the personal journey of Kabali, as he tries to find his lost family more than the action gangster portions.

The reason I went to see the movie again was because I really didn’t get the underlying political message that the filmmaker was showing us, trying to slide it past the censors.  After I read Margaret’s great analysis of the film, I went back to see it again and all the song lyrics about oppression and slavery lept out at me.  I saw that the Tamil cop who had warned Kabali to be good in the jail collaborated with Kabali to bring down the Chinese gangster Tony Lee, but after that plotted Kabali’s downfall.  It seems if you rise too high, you will be chopped down again.

Kabali’s wife has a key speech where she tells him he needs to always dress well to garner respect.  She gives up her family to marry our lower caste hero.  He always dresses in a suit coat.  And his lounging cross-legged before each villain in his suit is a political message in itself.  I belong to sit here with you.  I am not your supplicant and my caste shouldn’t matter.

There’s also a message in how Kabali’s wife is a domestic servant who is shuttled from family to family and country to country with no say in where she can live.  And that Kabali returns to Chennai, the first in his family since his grandfather left for Malayalsia.   The villain is Tony Lee, and the fact that he is of Chinese heritage has a meaning. too.  I read that Prakash Raj was originally supposed to be the villain and that would have given a completely different meaning.

I think the recent Malayalam film Kammattipaadam did a better job conveying the injustice done to an oppressed people (the Dalit) through a gangster narrative.  Until I read Margaret’s piece, I didn’t fully understand what the director was trying to convey.  But then, Pa. Ranjith was working at trying to convey a message past the censors in Malaysia.    Kudos to Rajnikanth for making this film for his fans in Malaysia.  It’s enjoyable just for the surface action story alone, but look deeper.  There’s more there than first meets the eye.

Three and a half stars out of five.  (Kabali was released in Tamil and Telugu.  I saw the Tamil version.)

I wasn’t a huge fan of the rock/rap thrumming electric guitar songs that make up most of the soundtrack, but I did really like this love song: