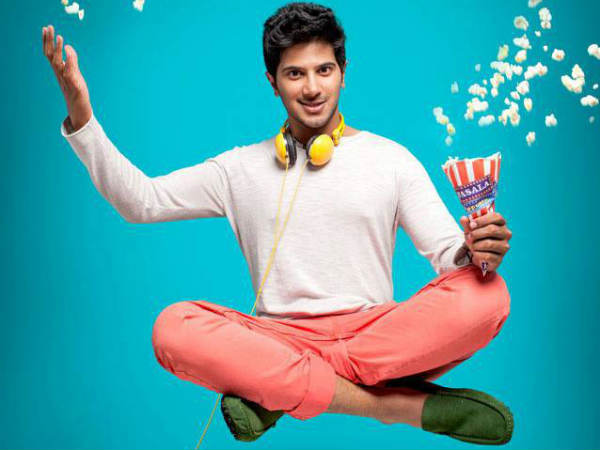 ABCD, the Malayalam film, is not Any Body Can Dance (the Prabhudeva film), but American-Born Confused Desi.  The comedy was released in 2013, early in Dulquer Salmaan’s career (after Ustad Hotel in 2012), and is obviously a showcase for him.

The interesting thing is that he plays a spoiled brat jerk who really doesn’t reform by the end of this comedy.

Dulquer is Johns Isaac, son of a millionaire doctor who I think owns some sort of medical company.  (The name Johns is odd — it’s not just John, and for awhile I thought he was being referred to by his last name.)  Johns hangs out with Korah (Jacob Gregory) his best buddy in New York, and they drive around in a Lamborghini.  Johns has flunked out of multiple colleges, and is a spoiled brat.  Johns gets into a fight with a black guy at a club, and the gangsters shooting up his parents mansion is the last straw for his parents.

They send Johns and Korah to  the ancestral place in Cochin, Kerala.  Dulquer is expecting a luxury vacation, and is horrified at the house his father rented for them, with no A/C and an outhouse.  They blow through $20,000 staying at a luxury hotel until suddenly the credit cards are cut off, and they’re stranded in India.  They get scammed by a guy in their neighborhood, and are down to their last $10.  (Their neighbor was pretty funny, played by S.P.Sreekumar) 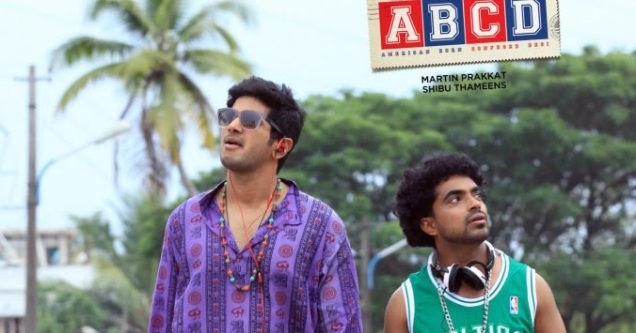 Dulquer’s dad then phones to say that he will pay them 5000 a month if they go to the local college where he has already enrolled them.

This is where this American-Born Confused Non-Desi got really confused.  They meet Madhumitha (Aparna Gopinath) who is an activist at their college.  She basically has this stern expression this entire movie, to be honest.  There is absolutely no romance in this film whatsoever, even though there is an epilogue over the end credits that Dulquer sends his love from NY and she sends it back.  But that part of the film is severely underwritten.  We’re just supposed to fill in the blanks I guess.  It’s like a hate-to-love that stays in the hate part for pretty much the whole thing.

Anyway, what confused me is that Aparna sort of set them up as if they are political activists, protesting the rising tuition that drove a classmate to suicide.  She’s trying to put these spoiled American boys in their place, but to her consternation, they become social media celebrities, and they get invited to join lots of other protests, which they do, because there is usually free food.  Interviews with press, free food.  It all snowballs until one protest turns into a near riot with police beatings.

The competing political parties that want these two American kids who have supposedly rejected their families’s millions to live the simple Gandhi-like life — these scenes were probably hilarious to people from Kerala, but mostly went right over my head.  There’s a basic level that was still funny, but I know I was missing a lot of the subtleties.

Johns and Korah read in the paper that they are in competition for young activist of the year — the 1 Lakh prize money they are planning to use to get back to the US.  Their main competition is the son of a local politician, and played by Tovino Thomas.  Again, it probably would have been hilarious if I knew what political party their rival was, and why he derided them for being Communist (I think?)  The slapstick fights with him and all, still funny, but the political satire that is the basis of most of the second half is beyond my limited understanding of Kerala.

These two spoiled jerks never really learn their lesson or reform.  I guess I won’t spoiler how they do find their way back to the US.  The satire of second generation NRI’s being clueless about India and spoiled brats– that humor I could totally get, and it was pretty hilarious.  Dulquer’s time at Purdue University probably helped him nail that part!

So, an amusing film, but you can definitely tell just how far Dulquer has come in a few short years.  And while there was no Prabhu, there was one catchy dance number from the NYC beginning part of the film, sung by Dulquer himself.

4 thoughts on “ABCD – The Dulquer movie, not the Prabhudeva one”