The soundtrack of Mirzya is simply amazing. Shankar, Ehsaan, and Loy have written some of my all-time favorite soundtracks, but Mirzya seems like it is a whole other level. This soundtrack is A. R. Rahman level fusion of folk sounds and electronic dance beats.  I downloaded the whole thing — I don’t often buy a whole soundtrack — and I’ve been listening to all 15 tracks constantly.  I had heard very mixed things about Mirzya the film, but I wanted to see it just to see the song sequences.  They were amazing.  The film itself was not always stellar, but it was worth it just for the glorious music.

I saw the very last showing of Mirzya at my local theater, all by myself.  This movie sure came and went lightning fast.  I enjoyed myself, and I will be buying the DVD when it comes out just to rewatch the song sequences.

I listened to The Bollywood Project girls’ podcast review of the film, and they recommended reading about the legend of Mirzya and Sahiban before watching the film.  I don’t know that it’s completely necessary, but it helped me recognize the mural on the wall showing Mirzya and Sahiban under their tree at the beginning of the film.  There’s also plenty of references to Romeo and Juliet just to drive the tragic love story point home.

Rakeysh Omprakash Mehra directed the fantastic film Rang De Basanti, and he uses a similar dual track storyline in Mirzya. Harshvardhan Kapoor is (Monish/Adil) and also the mythical Mirzya.  Saiyami Kher is both Soochi in modern day, and the legendary Sahiban.  Both actors made their debut in Mirzya and it shows, unfortunately.  Harsh is, of course, Anil Kapoor’s son and Sonam Kapoor’s brother, and I’ve read that Harsh took no salary for the film.  This is a tragic epic romance and while both Harsh and Saiyami are pretty to look at, they just didn’t have the sizzling chemistry needed.

Director Rakeysh Omprakash Mehra uses a sort of Greek chorus of folk dancers for the songs, and they have more sensuality and sizzle than the two leads, especially in the Chakora song barn love scene.

The modern day story shows young Soochi and Monish as childhood best friends, separated after something tragic happens.  Both child actors were fantastic, and the little boy had more screen charisma than adult Harsh!  Possibly my favorite song on the soundtrack is the pounding Hota Hai, and I was a little taken aback as the song in the film shows their separation as children and what happens to young Monish. 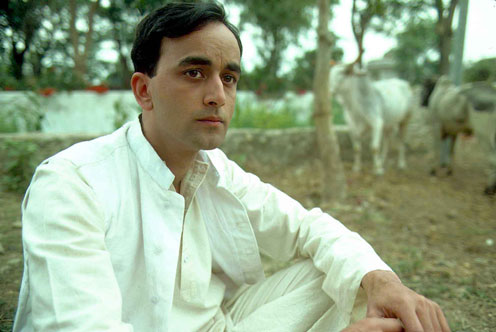 Soochi’s devoted single father is played by Art Malik.  I don’t think he’s done many Bollywood films, but it was so great for me to hear his voice again.  Oh, my gosh, did I have such a crush on Art Malik back in his Jewel in the Crown days.  (Oh, Hari Kumar!)  It’s rather ironic that he’s playing the disapproving dad keeping star-crossed lovers apart when he is perhaps best known for the tragic interracial romance in Jewel in the Crown!  He had one scenery chewing drunk scene in Mirzya that was way over the top, but otherwise, great to see him on film.  Malik (Pakistani born, and raised in England) has a mix of Hindi and quite a bit of English dialogues in the film, and teaches his daughter Soochi English using Romeo and Juliet lines — in case we hadn’t gotten the point.

Soochi and Monish (now Adil) reunite as adults as she’s about to marry an actual prince (!!) and he is the literal stable boy.   (The prince Karan was played by debut actor Anuj Choudhry, who was quite good.)   Soochi and Monish did not have the kind of chemistry needed for us to believe Soochi would leave her prince for the stable hand.  I thought we should see both of them just burning holes in each others clothes with smoldering glances before the big barn love scene, and I just wasn’t feeling it.

I wanted to fall in love with their princess and the pauper epic romance, but it just didn’t work all the time.  She was supposed to be this firebrand, and Harsh played his scenes quite passively.  Another better actor would have acted humbly while showing us an undercurrent of passion towards Soochi and resentment and rage towards the prince.  But Harsh doesn’t have the skills yet to do that.  I suspect Harsh will improve with time, as his sister has.

This is a petty point, but Harsh is quite slight of build and small of stature, and his baggy stable clothes made him look quite tiny next to Karan the prince. 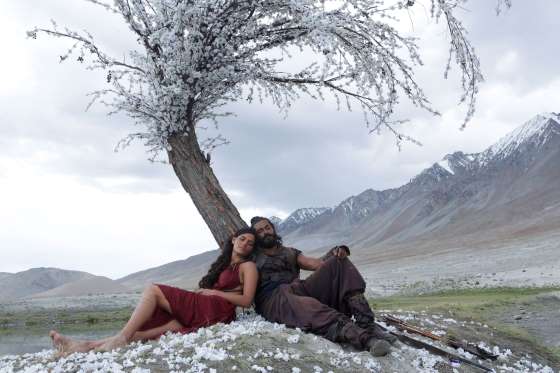 Bottom line, the film was worth seeing just for the incredible song sequences alone, and there were a lot of them.  The cinematography was also gorgeous, and Mehra shows us some beautiful scenery in Ladakh and Rajasthan.   These two newcomer lead actors, though, just didn’t have the spark and sizzle needed for the epic tale of Mirzya and Sahiban.

I think Harsh could grow and I’d like to see him in something where he actually has more lines to speak.  He can be relaunched in something else.  What genre, I have no idea, but hopefully with a better beard or shaved so we can see his pretty face.  Being a star kid gives you a chance at being a film star, but you have to have the goods to sustain a career.  This great article about Dulquer Salmaan forging his own path in the shadow of superstar father Mammooty shows that you have to have the talent to make it big after you get that first break!