I have been anticipating Mahanati for a year, since Dulquer Salmaan posted a picture of himself on twitter as Gemini Ganesan, announcing that he was debuting in his first Telugu film, a period piece. 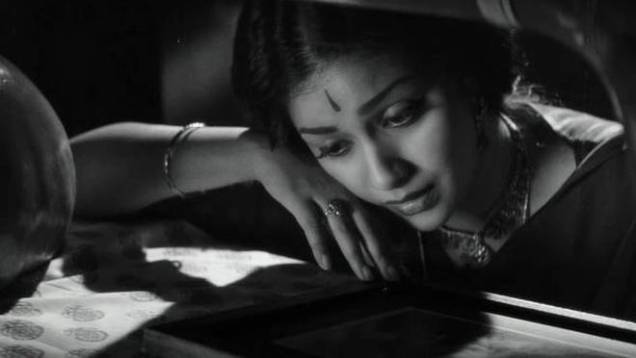 I didn’t know anything about the legendary actress Savitri until I posted my trailer reaction to the Mahanati teaser trailer.  I asked for people to send me links and clips, and my Youtube viewers sent me songs and scene clips, but universally, they all told me I HAD to see Maya Bazar.  Boy, am I glad I watched the 1957 classic film before I watched Mahanati.  Because the very first glimpse of Keerthy Suresh in the film is a filming of a famous scene from Maya Bazar, and I recognized it immediately.  Watching Maya Bazar meant I could judge whether Keerthy was nailing it as Savitri — and boy did she ever!

Here’s my full review of the film:

Dulquer Salmaan had to walk a fine line.  He played the actor Gemini Ganesan, who married Savitri even though he was already married, and also had a mistress (with whom he fathered Rekha!).  He has to be so charming and compelling that you believe that Savitri would fall for him, and you also don’t like him very much at many points in the film.  He did an exceptional job.

Vijay Deverakonda and Samantha Akkineni play newspaper reporters compiling a story about the mystery of Savitri’s last days.  They have a wonderful chemistry together.  Samantha Akkineni has a career best speech in the final 15 minutes of the film.

Hats off to director Nag Ashwin, for an incredible film, only his second full length feature film.  This film covers the 50’s through the 80’s and the period details seem to be perfect.  Many, many scenes from classic films are recreated, including actor Naga Chaitanya playing his grandfather ANR.  It’s an amazing scope for a film, and so ambitious a project.

But the key is that Keerthy Suresh really captures the charm and spirit of the legendary actress Savitri.  It’s a career best performance for her. The soundtrack is also exceptional, and I’m playing Mooga Manasulu (Muted Hearts) on repeat.