Swiss Army Man was the craziest film we saw at Sundance 2016. (And we saw 22 films, so that’s really, really saying something.)  I saw the trailer before my viewing of The Lobster this weekend, and that reminded me that Swiss Army Man is coming to theaters June 24th.

The film begins with Paul Dano trying to hang himself on a deserted island.  A dead body (Daniel Radcliffe) washes ashore and begins to fart.  Copiously. 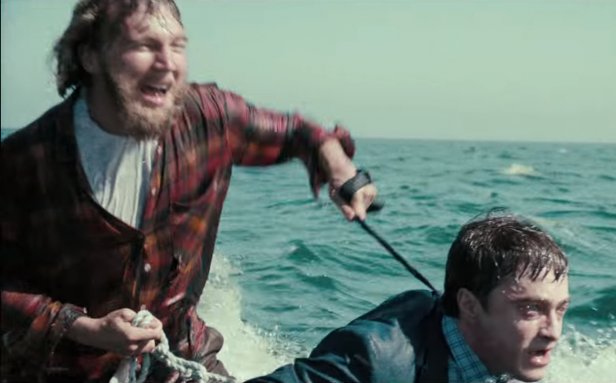 Dano rides Radcliffes’ flatulent body like a jet ski off the island.  This is the first 10 minutes of the film, and it sets the tone of magical realism.  I don’t think I’ve ever been at a Sundance showing at Eccles Theater (the largest venue) with so many walk outs.  I was seated 7 rows from the front, and two groups of 4 people in seats in front of ours walked out only half an hour into the film.  From an article in Variety, they weren’t the only ones.  And this was after there were huge lines of people trying to get in to the showing.

This film was very divisive at the fest.  My husband hated it and found it juvenile.  My 23 year old son loved it, and gave it four stars (out of four).  I think it was his favorite of the whole festival.  I was in the middle.  I laughed quite a bit, but it wasn’t my favorite, by any means.

The title, Swiss Army Man refers to all the ways that Daniel Radcliffe’s dead body saves Paul Dano’s on their journey back to civilization. Strike a spark, and the farting corpse lights a fire. Dripping rain fills the body with drinkable water (gross!). The body begins to talk, and they have conversations on the meaning of life, and what it means to be alive. It’s philosophical, and crazy weird. The body sees a picture of a girl on Dano’s phone, and his erect penis becomes a compass. Really.

The acting is great, and I have to give kudos to Daniel Radcliffe for his physical work.  He had to hold what looked like extremely uncomfortable poses as a dead corpse with a broken neck.

“The Daniels”, the directing duo of Daniel Scheinert and Daniel Kwan, won a special jury prize for directing this film at Sundance. I wasn’t familiar with them before the fest.  Evidently, they “broke the internet” with their music video Turn Down For What.  Daniel Kwan, one of the directing Daniels duo stars in the music video:

You, dear reader, have the advantage over all those festival goers at the premiere.  You can watch the trailer below and decide if this is your kind of movie.  It’s certainly one I will never forget.