The 2006 Telugu Rom Com Bommarillu starts with a father helping a toddler walk on the beach and the voiceover says — “Shouldn’t a father let go his son’s hand after 24 years?”
Siddharth looked SO young in this film!  Oh, my goodness, he barely had a little peach fuzz little goatee. 2006 was the same year as Rang De Basanti.

Prakash Raj is the father, and  I’m enjoying so much seeing Prakash Raj in these father roles in Southern movies — rather than the villain heavy he plays so well in Hindi films.
He’s a loving — but very controlling father.  He gives all the luxuries to his kids, but picks out everything, down to the clothes he buys for them.  Siddhu (Siddharth) is smothered.  Prakash arranges a marriage for Siddhu with a girl who only parrots what her father told him.

Then Siddhu meets Hasini (Genelia D’Souza).  Her unconventional fun loving attitude appeals to him, and he finds her calling him an idiot endearing.

Genelia D’Souza we all loved in Jaane Tu…Ya Jaane Na.  For Bommarillu she won the best actress South Filmfare award.  She is very much like Geeta in Jab We Met.  Genelia in Bommarillu is a little chatterbox, naive,  and brings sunshine wherever she goes. 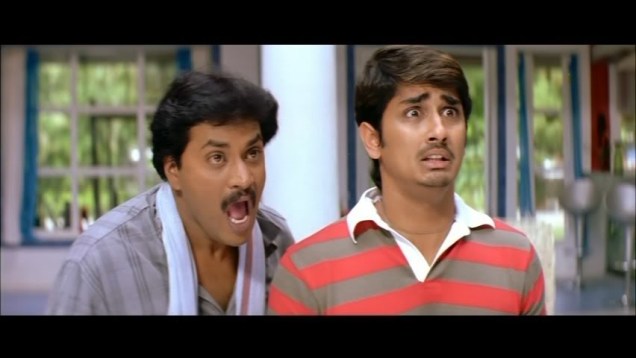 Siddhu leads almost a double life.  He tries to act as the perfect obedient son at home, and his parents never suspect he drinks, gets wild with his friends, and is trying to start a business.  There’s a lot of very funny  moments in this film, and Siddharth is great at the comedy.  It wouldn’t be a Telugu film without the comedy uncle Brahmanandam – here he plays the loan officer.  Comedic character actor Sunil Varma is the family servant, who frequently gets Siddhu out of whatever jam he’s in. 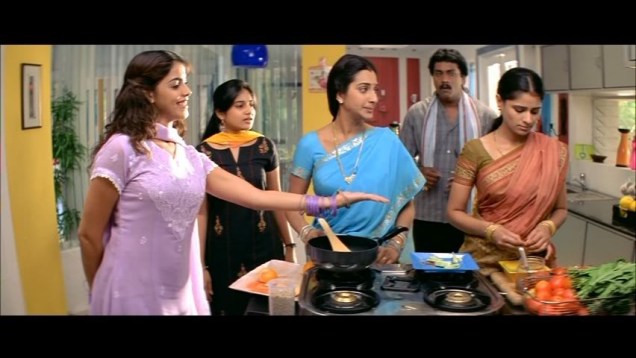 To convince his father that she is the girl for him, Siddhu asks if Hasini can stay in the family home for a week.  Siddhu’s sisters and mother won’t even speak to her at first, but her irrepressible charm slowly wins everyone over. 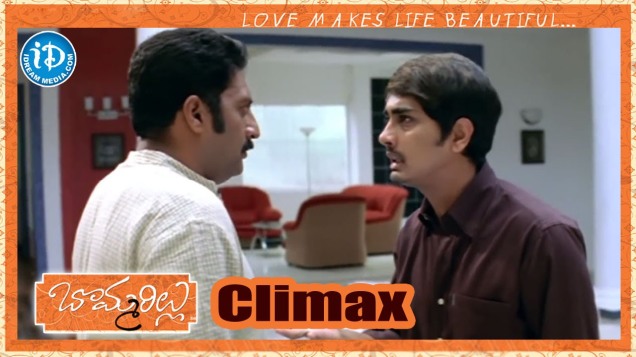 But then Siddhu tries to repress her and make her quiet to please his father.  She innocently reveals all that Siddhu has hidden from his entire family, but especially his father.  There is a big final confrontation with the father.  The film has a nice message advocating love marriage, and even the meek girl fiancee gets her own little feminist moment at the end.
Genelia was just a bubbly delight in this movie — she so much reminded me of Kareena’s performance as Geeta in Jab We Met.  I think I’d only seen Siddharth in dramas like Rang De Basanti and Enakkul Oruvan and it was really fun to see him in a lighter Rom Com.