After seeing the fantastic Malayalam film Angamaly Diaries last week, I couldn’t wait to seek out director Lijo Jose Pellissery’s other films.  City of God was the one recommended to seek out first, and glory be, it’s on Google Play for rental and purchase.  At $4.99 to buy, I snatched it right up.

City of God is part of the New Generation of Malayalam films with a hyperlink non-linear narrative of four interlocking stories.  It came out within months of Traffic, the first of the new wave Malayalam cinema, but City of God was pulled within a week of release.  It may have been a bit ahead of its time.  It felt much grittier and more violent than Traffic, and isn’t really suited to a broad family audience.  I felt Traffic relied a bit too much on the audience’s familiarity of all the actors in that multi-starrer, and I didn’t really get to know any character that well.  I liked City of God much more.

A signature of Malayalam New Wave films is an accident, and coincidences that bring people together and set off the events of the film.  City of God starts with a horrific car crash.  Prithviraj is driving a car that crashes into a street light pole, after hitting a motorscooter with a young couple.  There’s also a van full of toughs that pile out to confront Prithviraj after the crash, and then we flash back.  We see the events of the film from several perspectives, replaying various key scenes from the point of view of different characters.  This is a movie where you have to pay attention a bit to catch on to what is going on. 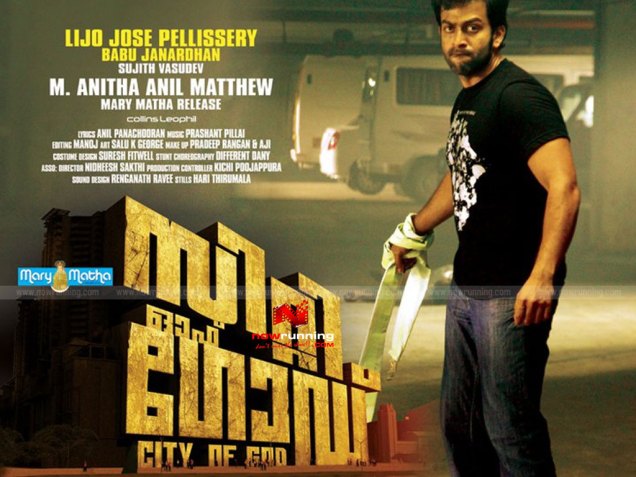 Prithviraj is sort of a capo or enforcer for his rich friend Sony (Rajeev Pillai).  He gets lots of very cool fight scenes, mostly just kicking and punching his way out of various jams, but in the photo above wielding a firehose like a urumi sword!  Prithviraj looked pretty bulked up, and this film was around the time of the filming of Aiyyaa.  Hubba hubba.  It was super fun to see Prithviraj be a sort of gangster tough guy, smacking people down first, and asking questions later.

Sony is obssessed with a young actress, Surya (Rima Kallingal).  He had a romance with her in the past, but his parents made him abandon her, and he’s trying to get her back, even though she’s married to an abusive husband.  Surya is a big actress, and one of the big musical numbers is cleverly one she’s doing for a film within the film.  The director was very clever about the songs.  There  was this one during a film shoot, one big one at a wedding, and then a couple more playing on a radio and so on.

There’s a complicated land deal going on between some corrupt business types, Sony, and some mafia.  Prithviraj is sent out to “deal” with one guy, and his wife then vows revenge. 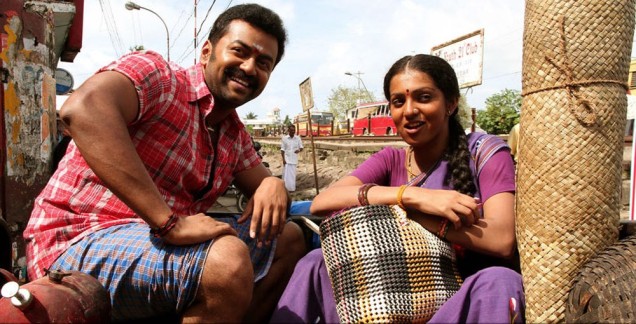 My favorite story line involved the migrant Tamil laborers who were working on the building project for Sony.  My reader Mohzin let me know that half this film is in Tamil, including half the songs!  He said that the Malayalam audience didn’t need subtitles for the Tamil speaking parts.  The love story of Swarnavel (Indrajith) and Marathakam (Pavarthy) is just so wonderful.  It’s the heart of the whole film.  Marathakam has fled Tamil Nadu and her abusive husband.  Swarnavel obviously loves her, but holds back as she is already married.  Marathakam’s friend Lakshmi (Rohini from Baahubali!) urges her to marry again, but Rohini has other ideas than poor Swarnavel.  She tells both the other thinks of them as either brother or sister, and so Marathakam, heart broken, agrees to marry a supposedly wealthy man.  Then comes my all time favorite scene of the whole film.  The  cops come and arrest her husband, and then she finds the drunk Swarnavel to chastise him for letting her marry this thief.  Then the sparks just FLY once they realize they don’t view each other as siblings AT ALL!  When he breaks off her mangalsutra — so hot!  Another favorite thing is that she won’t kiss him as he’s drunk, and sobers him up with a bucket full of water over his head!

This is the couple from the opening scene accident who were on the motor scooter.  Why they were so frantically racing on that bike gradually is revealed.

Prithviraj doesn’t get a full on romance in the film, but he does rescue a damsel in distress and gives her very swoony longing looks through the rearview mirror.  Mostly, in this film, he just gets to kick ass in very cool fights, and he seems much more savvy and smart than anyone around him.  But then Prithviraj usually does seem like the smartest one in the room.

The tone of the film can change dramatically from scene to scene,as we’re going from one character’s point of view to the next.  There are several side characters who have comedic moments — quite a few sort of comedy uncle characters.  The main actors were all pretty good, but the guy playing Sony didn’t make much of an impression on me.  Prithviraj, Pavarthy and Indrajith were the standouts. Indrajith stole the whole movie, in my opinion.  I don’t really remember him from Classmates, but he’s in Amen, which I’m going to try to watch next.  Pavarthy looks so completely different from any other character I’ve seen her play, that I honestly did not recognize her until I saw her name in the end credits.  Once I went back and rewatched that HOT love scene song, I could tell it was her, maybe with darker makeup?  Quite the different look than in Bangalore Days or Charlie!

The cinematography was quite interesting.  Some cool different angles to many shots, and great editing.  The fights didn’t feel quite as intimate as the recent Angamaly Diaries.  There was a steadicam being shook up, I guess to  imitate the Bourne films, but it just made me dizzy.  It worked in Angamaly Diaries, and didn’t work for me here in the same way.

As I said earlier, I didn’t really enjoy the hyperlink in Traffic, as there were too many shallow stories that weren’t developed.  Here, there were four key stories that interconnected, and the characters were more fleshed out.  This film can be gritty and violent like Kammatti Paadam or Angamaly Diaries.  Maybe the audience 6 years ago wasn’t quite ready for an innovative film like this.  Angamaly Diaries is still the better film, but it was really fascinating to see this director developing his signature style.