I was blown away by Vishal Bhardwaj‘s Haider, an  incredible adaptation of Shakespeare’s Hamlet starring Shahid Kapoor.  Omkara is part of his Shakespeare trilogy (Maqbool, Omkara, Haider).  Omkara works extremely well as a modern adaption of Othello in rural Uttar Pradesh India.  This is a stellar cast, and some of the best performances I’ve ever seen of some of these actors.  I have been sitting on this DVD for Netflix for some time.  I knew it was going to be excellent from everything I’d read, but it is such a depressing story!

I think I read Shakespeare’s Othello play in school, but to be honest I’m more familiar with Verdi’s masterpiece opera Otello, which I’ve seen a few times at the Lyric Opera in Chicago.  Otello focuses much on the relationship of Desdemona and Otello and the intense emotions and drama lend themselves very well to opera.  It became a signature role for Placido Domingo, even if it’s a bit bizarre to see blackface in a modern stage production.  Giuseppe Verdi is like Vishal Bhardwaj in that he adapted Shakespeare in three Italian language operas:  Macbeth, Otello and his final opera Falstaff.

The music added to a play like Othello only enhances the inherit drama, and if it works so well in opera, then I knew it would translate well to an Indian drama.  The music enhances the contrast between the love between Omkara (Ajay Devgn) and Dolly (Kareena Kapoor) and then the final death scenes.

Otello the opera starts in the middle of Shakespeare’s play and skips the early statecraft plot points, and the bits with Desdemona’s (Dolly’s) father.  But Bhardwaj keeps that all in, to great effect.  The opening scene shows Langda (Saif Ali Khan) [Iago]  telling Dolly’s groom Raj that his bride Dolly is not going to show for the wedding, Omi (Omkara) has stolen her away.  There’s then a confrontation between Dolly’s father, and Omkara.  Ajay has a dramatic entrance wearing a black shawl that looks like a big cape.  Dolly’s father doesn’t intimidate him in the least, and then there is a scene where Dolly admits to her father she went willingly to elope with Omi.  Ajay Devgn is naturally darker skinned than many actors in Bollywood and Kareena Kapoor has very light skin.  The Indian update to Othello being a “Moor” is that Omkara is half-caste, his father a Brahman and his mother a low-caste mistress.

Omkara (Ajay) is described as a Bahubali.  When I first heard this word in the movie, my ears pricked up because I’ve never heard the word except, of course, in the Telugu blockbuster Bahubali.  In the subtitles of Omkara, it’s translated as General.  I looked up the wikipedia article and this is how Omkara’s character is described:

Omkara Shukla or Omi (Ajay Devgan) is a bahubali, a sort of political enforcer. He is the leader of a gang which commits political crimes for the local politician

So interesting!  As I thought that was a Telugu word specific to Rajamouli’s movie. 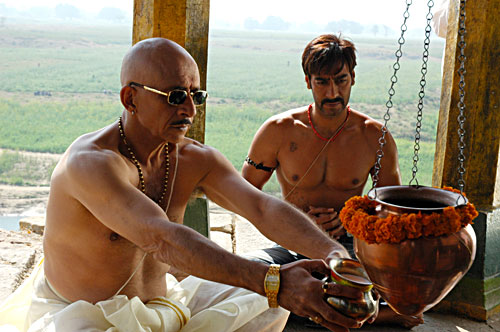 Omkara is a powerful political goon, and Langda (Iago) and Kasu (Cassio) are his lieutenants.  After Omkara elminates a political rival, their Bhaisaab (Naseeruddin Shah) is going to be the next representative at the national level, and Omkara will take his place at the state level.  There’s a ceremony to name Omkara’s successor, and the younger Kasu is picked to be the next bahubali over Langda.  Kasu is picked because of his connections to the youth and college students.  This is the source of Langda’s plotting and burning jealousy, that he was overlooked for this promotion, just as in Othello.  Again, the parallels Bhardwaj draws to the rough and tumble of Indian politics work so well, and this is definitely a realm of people taking offence to violent deadly extremes over slights of honor.

We’ve seen Omi (Ajay) be dominant, and quick to kill when someone offends him or insults his relationship with Dolly.  But we also see what a different loving person he is with Dolly.  Bhardwaj also composed all the music in the film.  This love scene has Omi coming to Dolly in anger after seeing her with Kasu, but her singing him an English love song (very badly) spurs this teasing chasing scene.  It’s one of my favorite sequences in the whole film.  With no one else can Omi show this tender side of himself. But one key difference in Omkara to Othello is that Omi does not marry Dolly right away.  He has abducted her, taken her to his home village and seduced her but drags his feet a bit on the wedding itself.  So Dolly is in a very precarious position, separated from her family.

Saif Ali Khan is so excellent as the diabolical Langda.  (Langda means limp in Hindi, and he is described as having a leg and a half.)  He is Omi’s most trusted lieutenant and advisor, and cannot abide being passed over for the young Kasu.  I am really not a Vivek Oberoi fan to be honest, but he was perfectly cast as Kasu.  Saif also is no pretty boy here.  His teeth are stained from betel leaves, and he has a roughness about him, not his usual suave film persona.

This is Saif Ali Khan’s finest role ever, in my opinion.  I think he mostly does action movies like Phantom at this point, and I wish he would not be so lazy and take on more work like this.  When he wants to, he really has the stuff.  He relentlessly manipulates Omi into thinking Dolly is cheating on him, gets Kasu drunk to disgrace him and so on.  When you have Ajay as Omkara, you need a worthy Iago, and Saif is just fantastic as Langda.  You hate his guts utterly, but admire the acting.

I don’t have to tell you the outlines of the plot, and it’s pointless to talk about spoilers with a plot hundreds of years old.  But it’s interesting the Indian touches that Bhadwaj adds to the story.  Instead of the damning handkerchief of the original play, there is an heirloom bridal belt adornment that Omi gives to Dolly to wear, Langda steals and gives to Kasu, who then gives it to his girlfriend (Bips, our item girl.)  Omi completely loses his shit when he sees this loose woman shaking her tail feather wearing the family’s heirloom.  There’s also a clever modern touch with stolen cellphones leading to further misunderstandings.

Kareena plays the innocent Dolly so, so well.  She’s completely loving, and just bewildered at Omi turning on her.  But she has her honor, too.  In their final scene, when faced with Omi’s wild accusations of adultery on their wedding night, she says, “Then  you’ll have to kill me.”  It’s devastating.

Ajay Devgn can be so brutal on film.  We’ve seen him play many mafia type leaders in movies.  If there’s any actor that can play someone who the audience believe would kill his own bride in a fit of jealous rage, Ajay is the one who can truly pull it off.  But Omkara shows his tenderness, his quick temper, and then his utter desolation as the truth of Langda’s machinations are revealed in the final scenes. 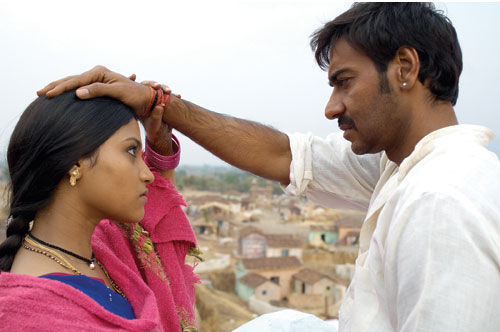 I don’t really remember if Othello’s sister had as large a role in the original play, but she warrants his final duet in Otello the opera.  Konkona Sen Sharma is a standout in a stellar cast in Omkara.  She is Langda’s wife Indu, and a tough woman in her own right.  She is a friend and support to Dolly, willing to battle her brother when she sees Dolly bruised.  And it’s not Omi that finally serves justice on Langda but Indu.  Thank you Bhardwaj for including that and giving Konkona Sen such a powerful moment.  In the original play, his wife is what leads to Iago’s arrest, but that’s not the kind of swift justice meted out in Omi and Indu’s village.

This film is dark.  Almost relentlessly so, but the acting performances are absolutely fantastic.  This film won award after award, and rightly so.

Four and a half stars out of five.