RIP Director Curtis Hanson. News of his passing from natural causes at age 71 greeted me this morning, and I’ve been thinking about him all day.

I never did see The Hand That Rocks The Cradle, his breakout film, or the entirety of River Wild with Meryl Streep and Kevin Bacon. (I’ve only seen bits and pieces of that film.)

My first Curtis Hanson film was the fantastic L.A. Confidential, for which Kim Basinger won an Oscar, and Hanson won a writing Oscar. Oh, my goodness, what a great film.  We can thank Curtis Hanson for giving two Aussie actors their Hollywood debuts: Russell Crowe and Guy Pearce.  These are two of my favorite scenes: 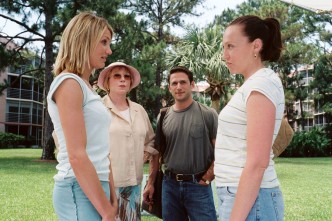 I enjoyed the quirky character study films Wonder Boys and In Her Shoes, but 8 Mile goes down as another of my all time favorite films.  Who knew Enimem could act, and be so riveting on screen even when he wasn’t rapping?  Curtis Hanson took a chance and wow, what a film.  (I totally forgot Michael Shannon was in 8 Mile!)

Hanson’s final film is Chasing Mavericks with Gerard Butler.  I missed it in theaters, but I think I need to find it.  RIP Curtis Hanson and thank you for some fantastic films.