I had almost forgotten that a friend had organized a group outing to see Bad Moms at our local theater that has waiters to take food orders (and alcohol!).  The waitress told me there were 150 women and ONE man in the audience.  One poor husband had come along (and he was in line behind us!).  It was a raucous crowd.  I laughed SO HARD partly because I was in an audience full of moms.  (And the dirty martini helped, too!)   I’m not sure the movie will be nearly as funny to wider audiences.  Mila Kunis is the lead and a mom with two middle schoolers (supposedly she got pregnant in the film at 20.)  I know she’s a mom in real life, but she still seemed too young an actress for kids that age. 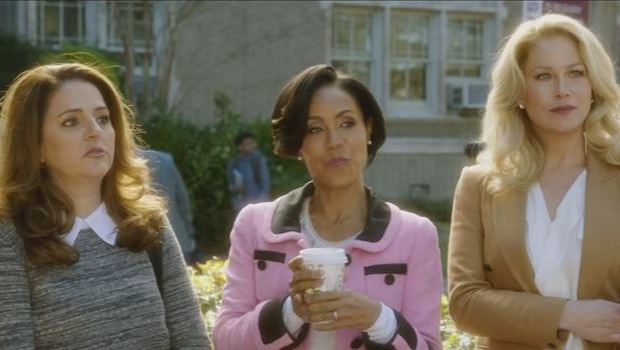 After a blowup at an interminable PTA meeting on a bake sale (boy, have I sat through those!), she becomes friends with moms played by Kristen Bell and Kathryn Hahn.

My favorite scene had them going on a drunken rampage through a supermarket.  They mix mudslides in a milk jug, and flip one dollar bills to the teenage boy clerk.  I was practically on the floor laughing at that point.
Of course Mila runs for PTA President, dates the hot widower, and somehow supports her family with a three day a week part time job.  Yep.  It’s a fantasy film.
It was a great girls night out film to see together.  I just don’t know if it would be quite as funny to non-moms.  For me, a mother for 24 years, I was laughing so hard I practically peed my pants.  But my sons would have zero interest in this film.  Still, it’s nice to have a comedy for adults.  All the actresses were great and very funny, and thank you filmmakers for that hot widower sex scene.
Interesting that the film was written and directed by two men.  The end credits showed each actress with their own real mom, talking about embarrassing bad mom moments.
Three and a half stars out of five.