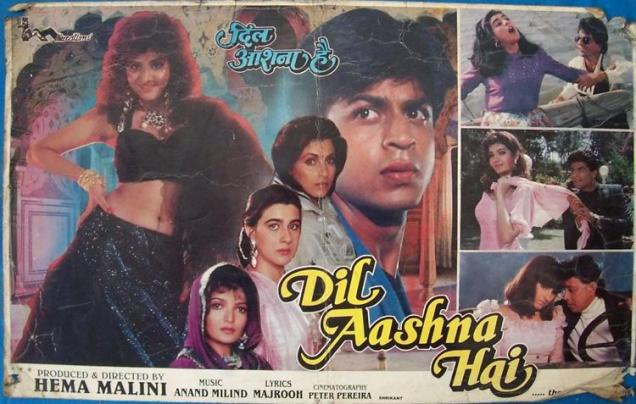 Dil Aashna Hai (The Heart Knows the Truth) is my 50th Shahrukh Khan film.  This film is Camp with a capital “C”.  Dil Aashna Hai came out in 1992, and is one of SRK’s earliest films.  The DVD is hard to track down, and Margaret of Don’t Call It Bollywood let me borrow it.  I’m on a quest to watch every one of Shahrukh Khan’s films, from the sublime to the not-so-great.  Fully a quarter of all the Hindi films I’ve seen have been Shahrukh Khan movies.

Dil Aashna Hai is a Hindi adaptation of Shirley Conran’s 1982 novel Lace, which was also a huge TV mini-series in 1984.   “Which one of you bitches is my mother?” TV Guide listed as one of the best lines in TV history.  I don’t remember much about the Phoebe Cates starring mini-series, but Lace the book was one of the first romance novels I ever read.  It was scandalous and racy, a book passed around from high school girl to high school girl, sex scenes marked and dog-eared.

The book was reissued on its 30th anniversary in 2012, and Sarah Hughes wrote in The Guardian that the book wasn’t just a bonkfest, it had a strong feminist message.   The flashbacks in the book as Lily tries to find which of three women is her real mother show the three women each pursuing their own career paths: 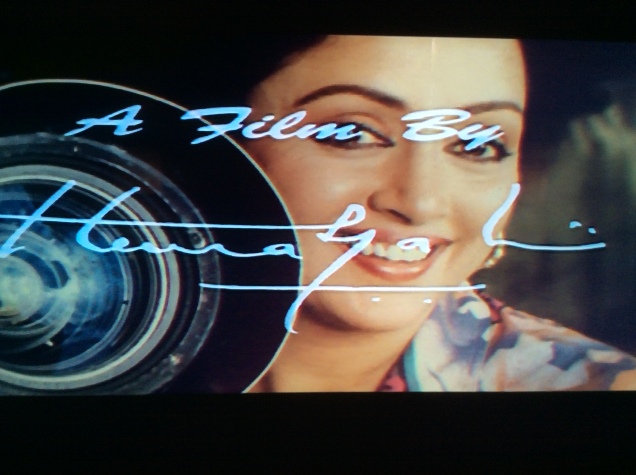 Major details of the original plot have been changed for the Bollywood remake, but at its core it’s still the tale of four women, and that alone is something to be celebrated.  That’s I’m sure what attracted director Hema Malini to the story.  Shahrukh Khan, no matter the size of his picture on the poster, is not the star of this film.  He’s a helpmate and support to Laila (Divya Bharti), a courtesan singer he falls in love with, who works at his father’s hotel.

Kabir Bedi plays SRK’s evil father, who is not thrilled that SRK wants to marry a girl who grew up in a brothel!  (Side note, Kabir was pretty hot back in the day!)

When the woman Laila has known as her mother on her death bed confesses that she was not her biological mother, Laila and Shahrukh go on a quest to find her true mother.  In the book, Lily is a famous film star, and has the money and power to go on her revenge quest on her own.  Here, Shahrukh proves his love for Laila by finding the orphanage she was stolen from by the brothel pimp.

Through flashbacks we see three young college girls played by Dimple Kapadia, Amrita Singh  and Sonu Walia fall in love and one of them becomes pregnant.  That is the same as Lace, but the blackmail of the headmaster of the college is cut from the Hindi movie.   The great thing about this movie is seeing these three actresses act together as young girls, and then mature women.   They rent a house together and enjoy all being mothers together of the young baby, but plan that the first to marry will adopt the little girl.

The movie just doesn’t have the same bite as the original, and it’s all saccharin sweet.  The romance between Laila and Shahrukh only gets one nice love song, but not so much screen time.  While it’s great that for once the women are center stage in a Bollywood film, if you’re looking for a great SRK romantic film, this is not the movie for you.  He’s adorable, and great playing the supportive boyfriend, but there’s not much here for him.

Divya Bharti overacts her way through the melodrama, brandishing the locket left with her at the orphanage in her confrontation with the three women.  It’s  all very campy, but not “Which one of you bitches is my mother?” deliciously campy.  It’s been watered down. 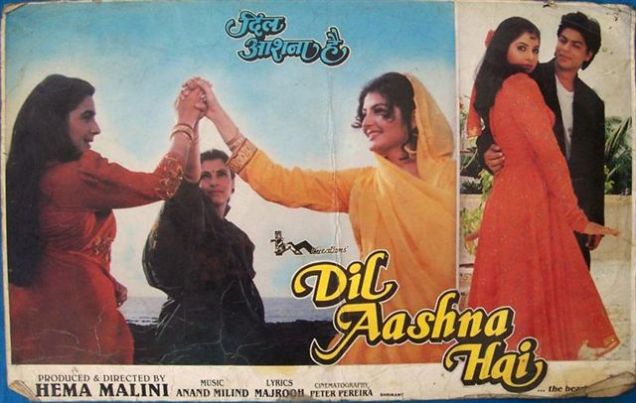 Now I can say I saw one of SRK’s earliest films, but it’s certainly not going down as one of my favorites.  Margaret loves it, but I’m not as fond.  She discusses and compares it to the original mini-series in her review.

Two stars out of five.  Only for the biggest SRK fans who need to see every one of his films.