I’ll be honest that I’ve been dreading OK Jaanu [OK Darling] because I love OK Kanmani so very much.  I went to an A. R. Rahman concert in Chicago and I heard the song Mental Manadhil for the first time, and I was completely blown away.  Rahman played this video while he sang the song, and I just had to see this movie.

OK Kanmani is a Mani Ratnam Tamil movie about two young people who are working in Mumbai, and thrilled to find another Tamil speaker.  I didn’t know at the time that Dulquer Salmaan is actually from Kerala and known for his Malayalam films.

I’ve become like all those people in South India — the Southern original is so much better!  There is an undeniable magic to the Mani Ratnam Tamil original.  The chemistry between Dulquer Salmaan and Nithya Menen is amazing.  And it’s one of my all time favorite A. R. Rahman soundtracks.  I listen to it all the time.  O Khadal Kanmani is the movie that started me on my journey of watching Malayalam films, because I just had to see what other films Dulquer and Nithya had done, which led me to Bangalore Days and on and on.  It all started with the Tamil OK Kanmani, which I have watched multiple times.

So, I had trepidation about OK Jaanu.  I like Aditya Roy Kapur okay, and Shraddha Kapoor.  I saw Aashiqui 2, and they do have decent chemistry together.  Then the Humma song came out, and I got excited.  The song from this scene in the original movie is cute, but one of the weakest of the Tamil soundtrack.  This is waaay sexier.

Then, something happened a week ago.  My father became very seriously ill and he has been in ICU at the hospital for this entire past week.  It’s been incredibly stressful, but he seems to have come out of the crisis.  I’ve been exhausted and spending all my time at hospital with my parents.  When I’ve had a moment to wind down, I’ve turned to Bollywood song videos as my sort of comfort food.  And tonight, I decided I deserved a break, and went with a neighbor to OK Jaanu.  It was just what the doctor ordered.  It took me away from all my cares and worries for a few hours. 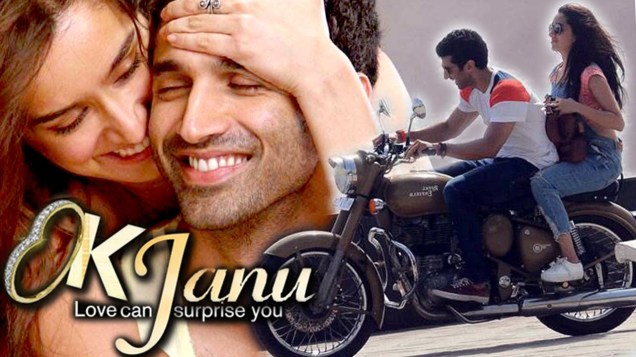 I think this is the best movie I have seen Aditya Roy Kapoor do.  He was truly adorable.  Because I know Dulquer’s performance in the original so well, I could tell when he was even trying to match Dulquer’s mannerisms, but he made it his own.  Shraddha is no sparkling Nithya but she was good enough.   Aditya was good in Aashiqui 2 and, not horrible in Fitoor (that movie had other problems), but I like him so much better quirky and cute like this than brooding and angry.  I’m also one of the few people who liked most of Daawat-e-Ishq.  (Not Aditya’s best look, but I still love this title song!)

The plot of OK Jaanu is basically identical to the original.  Adi (Aditya Roy Kapur) is a young video game designer who has just arrived in Mumbai, and is staying in a room of the house of his brother’s former boss (Nasureedin Shah).  Nasureedin’s wife has Althzeimer’s.  Adi meets Tara and a torrid romance begins, but they both vow they never want to marry.  He’s determined to move to the US, and she wants to study architecture in Paris.  They convince Adi’s landlord to let them live in sin together in his room.  All comes to a head when they both have to leave to follow their careers — will they choose love or their career?  It does have a fantastic message that a girl shouldn’t have to give up her career for marriage — her career is just as important. 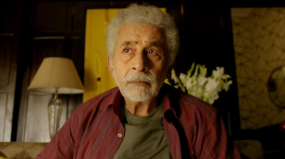 Some of what made the original special is lost in the Hindi translation.  Part of what drew Adi and Tara together was that they were two Tamil speakers alone in the big city of Mumbai.  That plot point is gone. Naseeruddin Shah is of course his excellent self, but I so adored the big hulking Prakash Raj, who so often plays the big villain, being the tender devoted husband to his ailing wife in the Tamil OK Kanmani.  The sets are certainly bigger and more expensive looking.

One thing that is a welcome addition are the new songs.  Enna Sona, sung by Arjit Singh is gorgeous, and the film turns black and white during this sequence as Adi is missing Tara while she’s away on a work trip.

My neighbor thought OK Jaanu was better than the original.  But she doesn’t really speak Tamil (her husband does) and watched it without subtitles.  She said Dulquer Salmaan’s accent was so thick she couldn’t understand him.  The original will remain one of my favorite films, and if you live in the US, I urge you to watch it on Netflix.   But, the Hindi remake is quite enjoyable.  It’s partly my frame of mind with all I’ve been going through but, this movie allowed me to forget my troubles for a few hours.   Thank God for Indian Cinema and that it is there whenever I need it.  I told my husband what a comfort it is to me in times like this.  I think I’m being more generous than some other reviewers may be, so sue me.  It’s no hardship to watch Adiya being this adorable for a couple hours!