I mostly loved Raees.  If you’ve read my last post, you know I have had a difficult month with my father having been in the hospital for a couple of weeks.  He’s better but things are still rough.  I’ve been so looking forward to this date — finally a new Shahrukh Khan film.

Raees is a great character for Shahrukh.  He’s playing a gangster — but a bootlegger with a heart, who makes dinner for his wife.  He’s got a lot of swagger and panache to him, and we are totally on his side as he seems to only kill bad people.

I love how the film starts, with the child Raees who works as a lookout and a mule for the local bootlegger.  Even as a kid, he has lots of moxie, and you never, ever call him four-eyes.

Raees has a great foil in the police inspector played by Nawazuddin Saddiqui.  What a dream to see these two actors going head to head.  Nawaz’s introduction scene left me in stitches.  He’s so by the book about illegal liquor in Gujarat, that his superiors don’t know what to do with him.  He won’t play the game, and keeps getting transferred around.  He’s like Wile E. Coyote against Raees the Road Runner, outsmarted at nearly every turn.

What I absolutely loved about the film was SRK’s relationship with Mahira Khan in the film.  Their romance is already existing at the beginning of the film, and the scene we discover that is amusing.  Mahira as Raees’ wife is steadfast, and the only one who can put him back on his heels.  They have a teasing relationship that feels real and adult — not a kid romance.

Besides the setting in the 80’s and all of Raees’ cool glasses, there is a wonderful homage scene to Amitabh and the classic gangster films of the past.  I haven’t seen Deewar (I know, I know, it’s on the list!), but I have seen another great Indian gangster film, Nayakan.  This has some of the same elements.  The gangster who becomes the champion of the people. 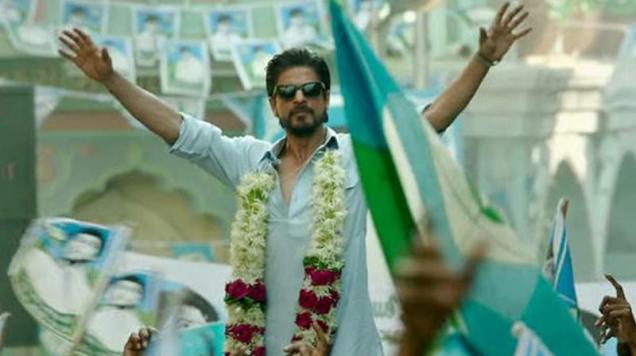 In Raees, he becomes a politician at one point to get past people who are standing in his way.

Is Raees a perfect film?  No.  I think Shahrukh had to stretch more as an actor in Fan.  But Raees is a crowd pleaser.  It has the music numbers, some romance, and the cool slow-mo shooting with a shot gun while falling type scenes.

I was tired going in to the film, even though it was a 2 p.m. matinee (I had to get up at four a.m. today)  And I was in a theater that had those reclining Laz-E-Boy type seats which didn’t help – but to be honest, it felt like the film lagged a bit in the middle at points.  I don’t think it was just that I was so tired.  I don’t think the film kept the tension going consistently.

Still, Shahrukh Khan had a great character to play, and it’s just a joy seeing him play a serious role like this, especially opposite Nawaz.  This is sort of like a Godfather type film, which Nayakan is an homage to, but somehow it didn’t quite have the pathos.  The Godfather and Nayakan deal with the tragedies in multiple generations, and Raees’ child is still a toddler at the end of the film.  While Shahrukh acted well in the parts where he was supposed to be a brash young man, he is getting a bit long in the tooth to pull it off.

It’s a very enjoyable film, just not a great one for the ages.  It’s nice to be arguing that kind of point about a Shahrukh Khan film.  It’s one I’ll be seeing again in theaters, and will be fun to rewatch.

Plus, Shahrukh dancing garba is always a good thing.  😉