What spurs me to drive 40 minutes to the only theater in Chicago that shows Malayalam films? – a new Dulquer Salmaan movie!  A woman stopped me as I walked out of the theater, “Do you like Malayalam films?” I told her of course and that I’m a big Dulquer fan.  She was incredulous and asked me if I understand Malayalam.  Not a word, I replied.

The trailer for Jomonte Suvisheshangal [Jomon’s Gospels], as with many Malayalam films, doesn’t tell you much about the film.

With bad news coming at us in America like a fire hose, it was just what I needed to go see a sweet family film starring Dulquer.  He’s getting a bit old to play the spoiled young man, it felt like a bit in the first half.  Just in looks though.  He acted it perfectly.  Dulquer was very much a mazik in the first half.  That’s a Yiddish word for someone mischievous, especially a young person.  He constantly got into trouble, but would just kiss his father after being scolded, “You still love me!”

A perfect example is in the clip below.  He badgers his father, Mukesh, for a motorcycle, “Petrol is so expensive!” and his father relents saying that he won’t give him cash, just have the shop send him the bill.  Then he rolls up in the most expensive bike possible, costing 18 lakh.

No one in the family feel they can count on the irresponsible spoiled Jomon.  He misses his sister’s wedding, can’t seem to pass his MBA exam, and spends his days running errands for the family.  His father tries to get Dulquer involved in one family business after another, the most hilarious his stint supervising their bus fleet, enjoying all the female attention he gets.

Not much happens in the first half except a flirtatious romance with a rich girl, played by Anupama Parameswaran of the Premam films fame.   That gives us the one non-montage song sequence in the film.  The machinations of Dulquer’s family to get him attached to this rich girl I found quite amusing.  Innocent plays Dulquer’s uncle who relishes matchmaking to try to unite with this wealthy family.

(On a petty note, I don’t think that super skinny jeans style is flattering on Dulquer!)

And then, right before the interval, everything in the family comes crashing down.  Mukesh has taken a bet on a business expansion, putting even the family home and cars in a money lender’s name.  While the rest of the family just heaps scorn on the family patriarch, Mukesh, Dulquer is the one to take him in the middle of the night away from it all to safety. 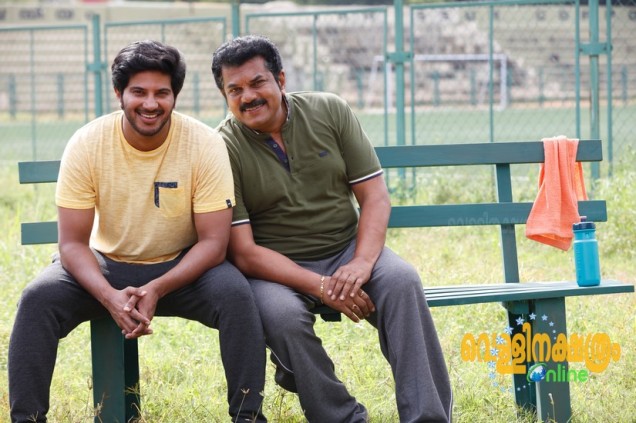 I have not yet seen what Margaret told me is Nivin’s very similar son-coming-of-age film, Jacobinte Swargarajyam.  This film is very much a story of the relationship of a son and his father.  I don’t think I’ve seen the actor Mukesh in another film yet, and I really thought he was fantastic.  He has some very emotional moments as he goes from powerful businessman, to a crushed man who tries to help his son by making him a tiffin lunch.  Both Dulquer and Mukesh are terrific actors, and were very believable as loving father and son, each hiding painful truths from the other.  In the second half, Dulquer has to really grow up and become the man of the family.  He is betrayed by a close friend and learns how to succeed through hard work and moxie.

Unlike the superficial romance in the first half, he gradually comes to get to know a prickly young Tamil woman, Aishwarya Rajesh, from his job selling textiles.  She doesn’t have time for his slick ways, but he gradually wins her over, daring her to smile.  “God wants us to smile at least once a day.”  This is one of his many pronouncements.  Her boss puts her in a tight spot keeping a rich French client happy, and she turns to Dulquer in desperation.  Like Dulquer, she lives alone with her father.  I wish their romance had been fleshed out a bit more, but what was there was very nice to watch.  I wasn’t completely happy with the ending to their story, which involved a prank on Dulquer’s father, Mukesh. 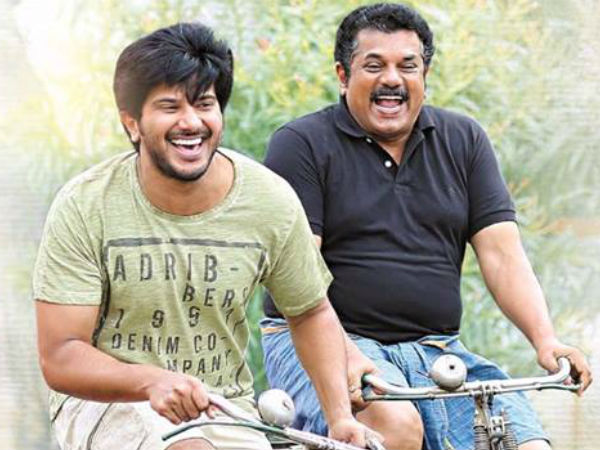 Does Dulquer learn the value of hard work and create a company out of nothing with his friends and win the big client?  Does he reunite his father with the rest of the family after proving just how responsible he can be?  What do you think?  While the story can be predictable, I found the journey a welcome time pass, especially with the warm father-son relationship portrayed by Dulquer and Mukesh.  I was also fascinated at an inside look at the textile industry in India!

Margaret and I saw this film together, and her review has a very interesting take on Dulquer’s character’s expressions of love contrasting with the rest of the family’s obsession with commerce and money.