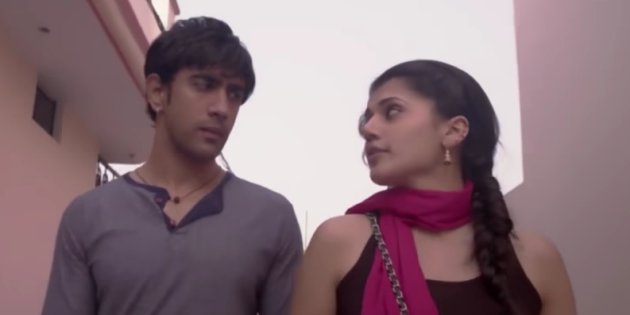 Margaret of Don’t Call It Bollywood let me know that I HAD to go see Running Shaadi which I don’t remember hearing anything about before.  I went in barely glancing at the poster, and not even seeing a trailer.  I haven’t yet seen Pink, so this was my first Hindi film with Taapsee Pannu.  (Just looking her up, I forgot she was in the wonderful Telugu film Mr. Perfect with Prabhas, as that movie is all Kajal to me.)  But you can’t imagine my delight that the lead male actor in Running Shaadi is Amit Sadh. 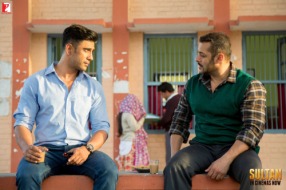 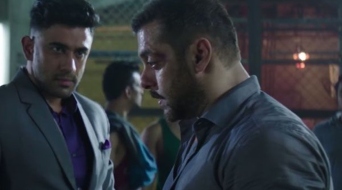 When I saw Sultan last summer, I was really taken with Amit Sadh, who plays the MMA promoter who convinces Salman to come out of retirement.  I remember thinking to myself, Who is that?  I want to see a movie with him as the lead!  Wish granted!  Evidently, he was also in Sonakshi’s Akira, which I will be seeking out directly, and I had forgotten he was in Kai Po Che.

Running Shaadi reminded me in some ways of Vicky Donor, in that it’s an under the radar movie that deals with some serious topics in an amusing and ultimately very sweet way. 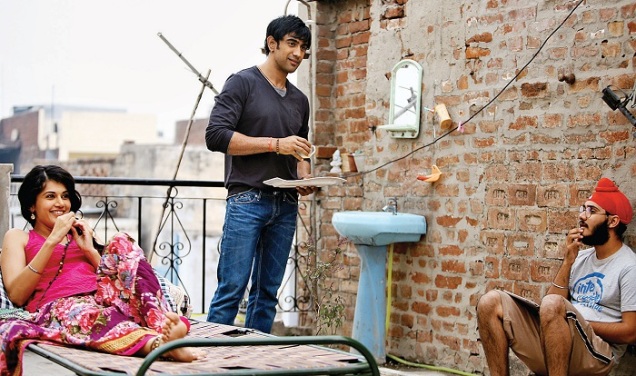 I was completely blown away by what happens in the very first 5 minutes or so of the movie.  I have never seen a rom com start this way, but I won’t spoil it for you.  Just know that the film begins with Amit working for Taapsee’s father in the family sari shop.  Taapsee is in pigtails and her high school uniform and goes to Amit with an impossible situation.  He is the only one she trusts to get her out of this jam. 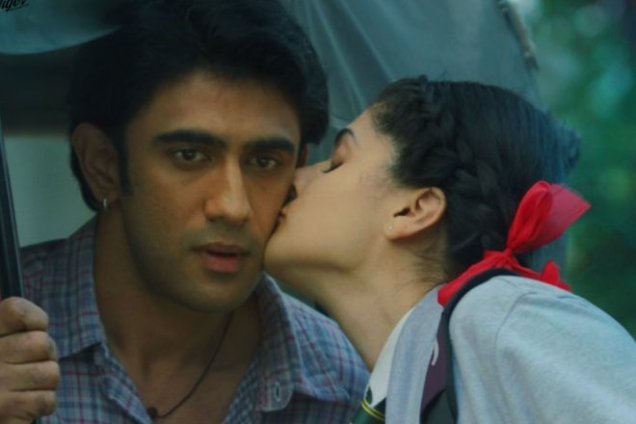 Taapsee gives Amit a sweet kiss on the cheek afterwards, and you can just see how dumbstruck he is.  They start dating at that point, but once she goes to college, he feels a gulf coming between them as she gains new sophisticated friends.  He constantly thinks that he is not worthy of her, as he is an orphan that her father took a chance on and gave a job long ago.  It’s a familiar filmi trope, poor orphan boy in love with the rich girl, but I love where this movie takes it.

They break up and he impulsively calls his uncle and finally agrees to the arranged marriage his uncle has wanted with a young Bihari girl.  He quits his job and has an idea to start a business helping couples run away and marry the person they want, when their families are against it.  He and his pal, played by debut actor Arsh Bajwa, start RunningShaadi.com (the .com was censored out constantly!) and they have to ask Taapsee for help as she has a credit card to secure the domain name. 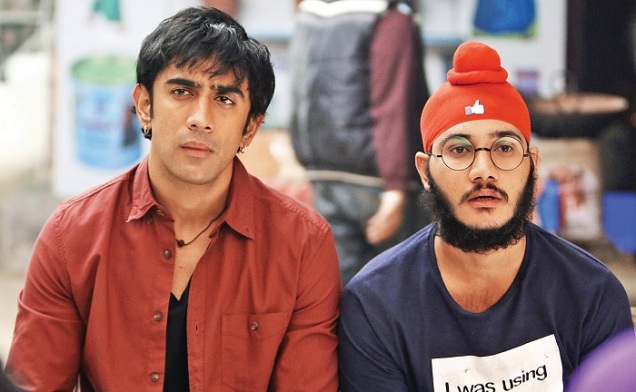 They help out all sorts of couples, inter-religious, intercaste and even a same-sex couple.  There is a wonderful undercurrent social message to this whole film, that of course love marriage is best, and the young people should be able to marry whoever they want.  The schemes to help the couples get quite elaborate and amusing, but their “disguises” are pretty ridiculous. 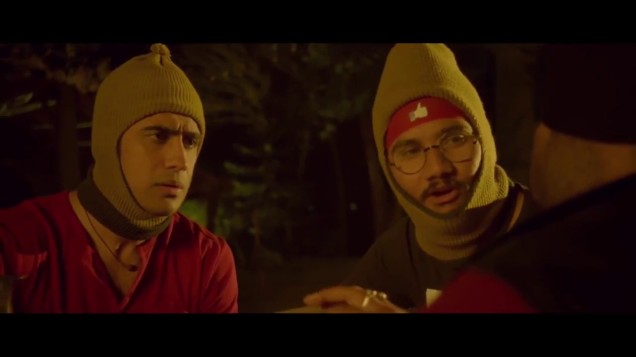 Taapsee comes to Amit asking for his help for her own running shaadi.  Amit asks who, and rejects that she’s joking when she immediately answers with you.  Then she tells him she wants to marry her college classmate Shunty, and he demands that they meet.  He goes through with the plan, and while they drive all night to the rendezvous point, Amit can’t help but look longingly at the sleeping Taapsee.  She then reveals that it was all an elaborate ruse to force him to marry her.  Zing!  I loved this twist that she just takes her fate in her own hands, and forces the issue.

Her family chases after them, and the three of them are on the run.  Taapsee gets injured and Amit is driven almost mad that he might lose her.  He is so caring with her while she heals that I was ready to swoon.  She goes out to buy condoms, and my jaw was about on the floor that that scene was in the movie.  Fist bump up in the air for that touch!

But oh noes!  Her family finds them again, and they must escape to Amit’s uncle’s, and that leads to dealing with the fact that Amit is still set to have his arranged marriage. 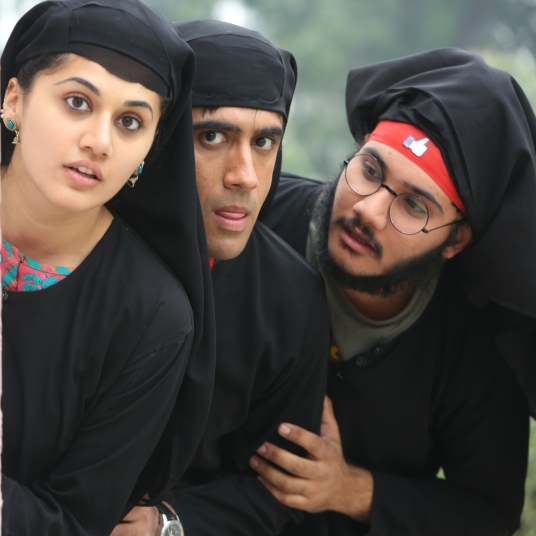 They figure out quickly that his intended bride doesn’t want to marry him either, and there’s an elaborate plot to give Amit his own Running Shaadi.  When Amit and Taapsee  finally are able to show each other how they feel, it was perfectly sweet, sexy and meaningful. 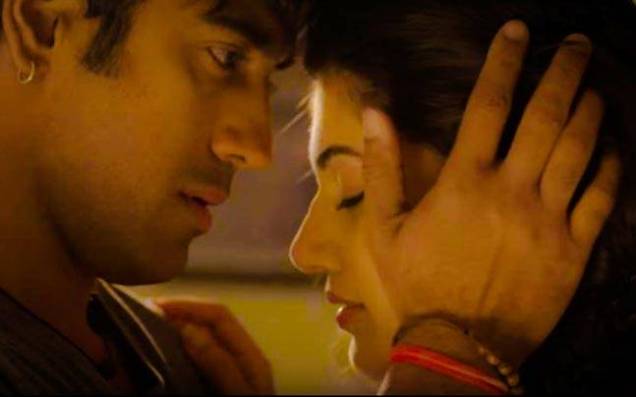 I absolutely adored this Rom Com.  It was one of the best Hindi romantic comedies I have seen in years.  I loved that it tackled some meaningful issues, and has a strong female lead who goes after who and what she wants.  Taapsee wasn’t the best actress ever, but Amit Sadh was just wonderful in this.  I cannot wait to see more films from him.  This is a debut directorial film for former cinematographer Amit Roy.  He also wrote the script which I thought was simply fantastic.  Running Shaadi may exit quickly from theaters, but if you don’t catch it there, it’s definitely one to seek out on Netflix or ErosNow.  Hindi movies with fresh actors can struggle to make a splash, but I will guess this film will gather fans over time.  There was just almost no marketing for it, and the songs weren’t anything special to give it that pre-release push either.  The film was only two hours and has just a couple of montage songs, and that was the only thing I had wished for — that it had more and better music numbers.  I will definitely be buying this film on DVD to watch again and again.