A month or so ago, I saw the teaser for the Tamil film VIP 2 with Dhanush and I was super excited that he was doing a film with Kajol.  This is her first return to Tamil films in 20 years, and it was great to see a woman in the kind of antagonist role that usually goes to a man in Indian cinema, like Sonu Sood et al.

Commenters on Youtube urged me to see the first film VIP before going to the sequel, and I’m so glad I did.

VIP 2, unlike many Indian sequels, does indeed carry on the story of the unemployed graduate played by Dhanush.  Pretty much all the main characters and actors from the first film are back, Dhanush still living with his father and brother, and his now wife played by Amala Paul.  I was a little annoyed that the film kind of made Amala’s character into a harpy, but the marital discord has real underpinnings in Dhanush’s characters drinking (an issue in the first film as well), and Amala’s unhappiness at giving up her job to tru live up to Dhanush’s sainted mother’s housekeeping.  At least the film showed that she regained happiness when she goes back to work when the family is in financial crisis — the title says after all that he’s an unemployed graduate!

Something happens near the end of the film which I won’t spoil that was the perfect way to bring Dhanush and Kajol’s characters together, and to make them resolve their differences.  It was very specific to the place of the film.  Dhanush himself wrote the script and dialogues, and his sister-in-law Soundarya (daughter of Rajnikanth) directed the film.

There are a couple of great dance numbers in the first half of the film, one very modern, and the other a more traditional style.

You can see and enjoy this film without seeing the first, but I’m glad I had seen VIP first because there are many references to the first film.

In anticipation of Dhahush’s upcoming VIP 2, I took the first VIP movie with me on my recent vacation to watch.  Dhanush is such a good actor!   The title VIP is shortened from Velaiilla Pattadhari (English: Unemployed Graduate)

I am really impressed with Dhanush.  I had previously only seen his Hindi film Raanjhanaa with Sonam Kapoor.  He was very good in that, but his role was kind of stalkerish.

In VIP, Dhanush plays a young man who has a civil engineering degree, and has been looking for the right job for 4 long years.  His father is frustrated with him.  Dhanush’s younger brother has a good job.  He applies and applies and can’t catch a break.  He belongs to a Facebook group of other unemployed young graduates.  I had no idea this was such an issue in India.

There’s an adorable romance with Amala Paul who moves in to the house next door.  She sees a lot to admire in this unemployed young man, and can’t help but be witness to all his struggles next door, and family drama.  They have great chemistry together.

Dhanush is fantastic in the couple of action scenes, and a really good dancer.  I also really loved this montage love song:

After a family tragedy, a coincidence leads to him getting a break, and getting a construction project.  The second half of the film deals with his struggles with an arrogant young rich developer.  He calls on his extended network of other unemployed graduates to help him out, and it was very moving.

I’m really excited to see VIP 2 now.  I don’t know if it will be a continuation of the story, or another retelling of a similar unemployed graduate tale.  The key is that it has Kajol! Not sure if she will be his boss or nemesis or what.

My neighbor brought me back a stack of Tamil DVD’s from her trip to Chennai and I’m slowly making my way through them.  I was looking for a lighter movie and took a chance on Vettai (The Hunt), a 2012  Tamil action comedy.  Arya AND Maddie in a movie together?  I’m in!  This movie just made me smile for so many reasons.

Vettai establishes the dynamic between the brothers with a scene from their childhood.  The older brother is actually timid and scared of everything.  When a bully hits him, the two years younger brother comes to the rescue.  Their father is a policeman, who then beats the younger son for getting in a fight.  He stoically takes the blows silently while the older brother weeps and wails even though not a single blow touches him.

That dynamic continues to the present day.  Madhavan who is physically large and imposing plays a very timid adult.  He’s scared of violence and confrontation.  His younger brother (Arya) is a rowdie, and quick to fight and intimidate anyone who threatens Maddie.  Their policeman father suddenly dies, and by family tradition, Madhavan as the oldest son should take his father’s place.  Arya convinces Madhavan that he should take their father’s job, the same one that their grandfather held.  Maddie tries to get Arya to do it instead, but he has 4 charges against him.

At first Madhavan enjoys the stature his uniform gives him, but he doesn’t know what to do when a young girl is kidnapped by the local goons.  He calls his brother Arya, who comes to the rescue.

Never underestimate the powers of disguise in a hoodie or a rain coat!

Madhavan gets the hero accolades, while Arya acts as his secret enforcer behind the scenes. 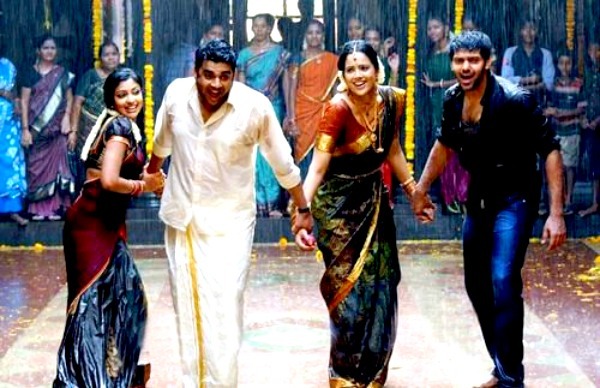 Interspersed with the action scenes, we have the romantic storyline.  Arya meets a very assertive young woman (Sameera Reddy) when he accidentally knocks over her motor scooter.  She turns out to be the young woman that their uncle wants to arrange a marriage with for Maddie.  It was a nice fake out.  Arya then is attracted to the younger shy sister (Amala Paul).  The romantic scenes give a lot of comedy and sweetness to the movie, and some nice music numbers.  I loved when Sameera’s character forces Arya to change his view of his brother, “Are you the older brother?  You don’t even have a job.  Don’t you think you should address him with respect?”

Things come to a head when Madhavan is badly beaten by the goon gang.  As you can probably guess, Arya teaches him to release his inner lion.  Cue training montage and action scenes.

This isn’t the greatest movie in the world, but it was entertaining and I loved the chemistry of Arya and Madhavan together as brothers.  Madhavan was really, really great in all the scenes where he is the gentle timid sensitive giant.  He has a great comic touch.  In his native Tamil, I think he has an even greater comfort in playing comedy.  I haven’t seen as many Arya movies.  I’ve seen his action film Urumi, and I’ve seen his sweet romantic roles like Raja Rani and Size Zero.   He carries most of the water in the romantic scenes in Vettai, and there’s a funny subplot with an NRI that is supposed to marry the sister Arya loves.

Three and a half stars out of five.   Nice entertaining light action romantic comedy.  Plus Arya and Madhavan dancing together!  Who can ask for more than that?