I have been anticipating The Big Sick‘s theatrical release since it started a bidding war at Sundance in January.  There was a slow roll out of the film, first just NY and LA and then adding a few cities each weekend until finally it came to my Chicago Suburb.  It made it to 5th in the US box office last weekend.  I saw it on a Wednesday matinee and it was nearly sold out!  On a Wed at 1:30!  (Granted it was Senior discount day, but still!)

I was worried the film wouldn’t live up to my hightened expectations — the trailer is so amusing, but I shouldn’t have worried.  I loved it!

I wasn’t familiar with Kumail Nanjiani really, as I’ve only watched a few episodes of his HBO series Silicon Valley.  He just is so charming and sweet in this film.  He immigrated to the US from Pakistan when he was 18, and has a tight knit family.  His father requested that Anupam Kher play him in the film, and they finally found a cousin of Anupam’s to reach him in India.  When Anupam first called Kumail after he read the script, Kumail hung up on him because he thought it was a prank! 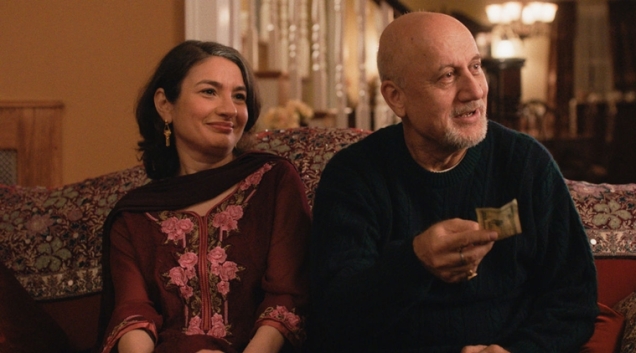 Zenobia Shroff, who I think has a few Bollywood credits, plays Kumail’s mother in the film.  Kumail wants to pursue a career as a stand up comic, but his family just wants him to take the LSAT and agree to an arranged marriage.  His mother has girl after girl “just drop by” when Kumail is home for dinner with his family.

Kumail meets Emily at one of his stand up shows.  She yells “Whoo Hoo” when he asks if anyone in the crowd is from Pakistan.  Then he gently tells her she should never heckle even if it’s a positive thing.  “Even if I yell out that you’re great in bed?” They have so much chemistry in the film.  It’s adorable.

When Emily finds the cigar box full of pictures of Pakistani women his mother has been trying to set him up with, they have a huge argument and break up.  Shortly afterwards Emily becomes seriously ill and is put into a medically induced coma in ICU.  Kumail has to notify her parents, and it’s very awkward when they are all in the waiting room together at the hospital.  Ray Romano and Holly Hunter play Emily’s parents, and they have a loving, but bickering relationship.  It felt very real to me.  Emily has told her parents about the breakup, so they don’t see any reason for Kumail to stay — but he has to.

Kumail has kept his relationship with Emily a secret from his family, because a cousin who married a non-Muslim white woman has been completely cut out of the family.  He is torn by his love of Emily and his devotion to his family.

Even though I knew things would work out, I cried in this film.  I also laughed out loud, and laughed a lot.  It is so funny.  Ray Romano and Holly Hunter were given license to improvise some of their lines, and they are gems.  Judd Apatow is a producer on the film and helped Kumail Nanjiani and his wife Emily Gordon write the real life story of their rocky courtship into a workable script.

I heartily recommend you listen to Terry Gross’s interview with Kumail and Emily on Fresh Air.  It’s fascinating hearing the process they went through to make this film with Apatow, and also more background on their families and relationship.

This film is about a real life conflict and a traumatic time in the lives of Kumail and Emily.  I won’t spoil how it all works out, but it was glorious to watch it unfold.  I highly, highly recommend that everyone see this film.  It lives up to the hype, believe me.  Just a delightful script, and great performances all around.

I’ve been reading about how we’re finally getting to see and hear Muslim-American stories.  There was Hassan Minhaj’s fantastic comedy special Homecoming King and of course Aziz Ansari’s Master of None series also on Netflix.  But this is the big time — a film on the big screen.  This film was made before we were in the midst of the Trump presidency, but seems even more topical now.