Two recent films I saw in the theater, are now streaming on Amazon Prime.

HIT is a Telugu mystery thriller starring  Vishwak Sen as a troubled detective.  This film produced by Nani is worth a watch!

Trance is a Malayalm film starring Fahadh Faasil as a faith healer preacher.  It’s the first film with Fahadh’s wife Nazriya since Bangalore Days.  The film is directed by Anwar Rasheed, director of Ustad Hotel.  The first have is exceptional, but I found the second half abstract and confusing.  Still worth a watch for Fahadh’s performance, and the supporting role of director Gautham Menon.

I saw Avengers Infinity War with my husband and my son Josh.  I invited Josh to be my special guest and discuss the film — because Josh has lots of opinions about Marvel films.  First we did a completely spoiler free review of the film.  We both liked it, and would give it 4 stars out of 5 – but the full evaluation has to wait for the final installment next year.

Our “Spoilerific” discussion was more lengthy, as we really dive deeply into the ramifications of the ending of the film for other upcoming Marvel films that are scheduled to be released in the next few years.

The day finally arrived! Padmaavat finally was released, despite rioting, threats against the stars and physical assault of the director. I saw it in 3D which wasn’t really needed, but was my only option. It’s not the best Bhansali film ever, but it’s Bhansali so you have to see it on the big screen at least once. And I feel compelled to probably see it again, because I’m so worked up about that school bus being attacked by rioters in India over this film.

The controversy over the film even reached national news here in the US.  I heard a five minute segment on the movie’s release, and the violence surrounding it on NPR this afternoon.

The above is an over 16 minute video review of the film, but I try not to give any spoilers (but we all know how it ends anyway.)

As Bhansali films go — it is average. It’s not my favorite, and besides the Ghoomar song, the music is not as memorable as Bajirao Mastani. But I’m there for the costumes, the colors and the sets, and they are GORGEOUS on the big screen. My local theater only has the film in 3D so you get to see those saris swirl out at you, gold threads shining. Shahid’s abs I could write an entire sonnet about — he has never looked better on screen!

The costumes were just even more stunning on a big screen.  The attention to detail in the jewelry, the saris, and the outfits that Shahid wore (and Ranveer) is just stunning.

Here’s a video about the design of the jewelry!

It was worth the cost of the ticket just to see the whole spectacle of the film, but it’s slow paced.  The run time is 2 hours 45 minutes, and believe me, at least a half hour could be easily cut.  The film feels flat and staid.  Anupama Chopra said the film lacked heart in her video review.  I also didn’t feel tension in the final moments.  We know what’s going to happen, but I’ve seen other films (like Neerja) where even though I know what’s going to happen I’m on the edge of my seat.  I just didn’t feel that. 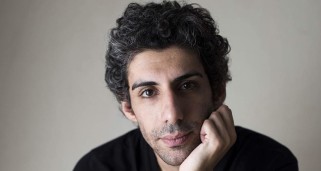 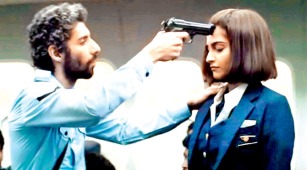 Speaking of Neerja, the great Jim Sarbh has a much bigger role as Ranveer’s slave in the film than I had imagined.  He actually has an entire song he sings to Ranveer!  I don’t like that his whole role is to prove that Alueddin is obviously evil because he’s bisexual, but Sarbh gives his role his all.  It was just a pleasant surprise how much screen time he had.

Aditi Rao Hyari who I last saw in Mani Ratnam’s Kaatru Velliyidai, was very good as Ranveer’s wife in the film. 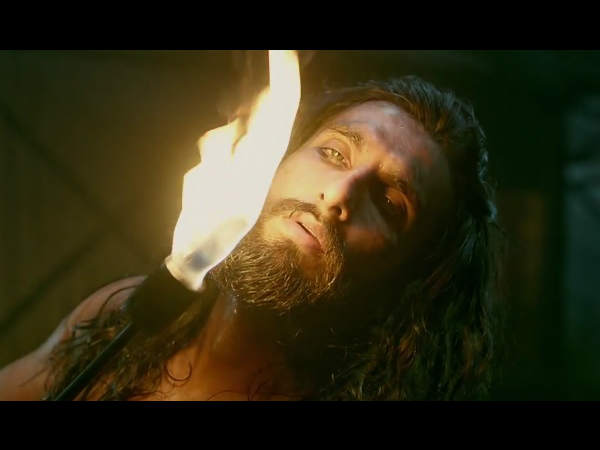 Ranveer is the stand out performance of the film.  He really chews the scenery as the Muslim conquerer villain. I hated though, that Bhansali had him almost always with a dirty face, and black clothing.

In contrast, Shahid was shown in white and pale colors, often in a pure linen shirt ( that did blessedly still show his abs through the loose weave — I love you costume designer!!)

Shahid did well as the proud arrogant Rajput king.  Deepika was absolutely luminous as Padmavati.  I absolutely loved her introduction scene, hunting with a bow and arrow like Katniss Everdeen in the forest.  How she meets Shahid the king was awesome.  She is shown to be smarter than Shahid’s king, like a chess player that can see three moves ahead, so kudos to Bhansali for that.

The film just didn’t live up to my very heightened expectations.  I just have greater expectations for the over the top films that Bhansali makes.  The music wasn’t as notable as other films, besides the Ghoomar number which is amazing! – and I can’t help but wonder if he held back on story elements or cut certain things from the script that would have made a livelier film, but restrained himself due to the controversy.  Even though there was a disclaimer before the film saying they don’t endorse sati — the way Bhansali filmed the last moments rather did do just that, and I don’t like that message.

I’m so worked up about the school bus being attacked in a riot about this film, that even though it’s average, I will see it multiple times just as my own personal protest.  It’s overlong and slow, but it’s Bhansali. You have to see it on the big screen at least once.

In anticipation of Agnyathavasi, I watched Attarintiki Daredi (Which Path Leads to My Aunt’s House?) (2013), which teams Pawan Kalyan with the same director,  Trivikram Srinivas.  This was a decent family drama pairing Pawan with two heroines,  Samantha Akkineni and Pranitha Subhash and with Nadhiya, Boman Irani and Brahmanandam in supporting roles. 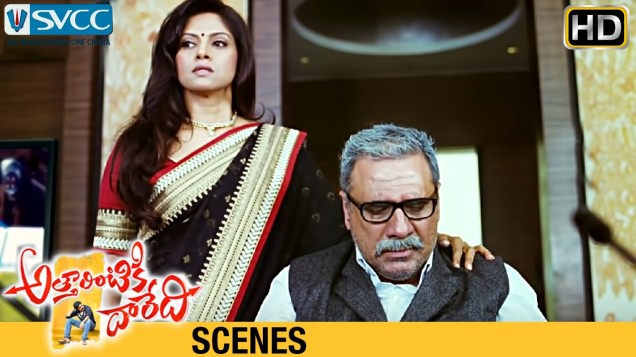 It was super fun to see Boman Irani in a Telugu film, even with his voice dubbed.  I assume he doesn’t speak Telugu well enough.  He plays the family patriarch, and Pawan’s grandfather.  Pawan is tasked to bring home his estranged aunt as his grandfather is critically ill, and wants to reunite with her while he still can.

Nadhiya plays the estranged aunt. and she was fantastic!  She was the best part of the whole movie for me.  She and Pawan share some very emotional scenes.  I looked her up afterwards as it was making me crazy where I’d seen her before.  She was Prabhas’s mother in Mirchi.

Pawan’s character is super wealthy but he enters his aunt’s household as a driver (sort of like Dharmendra in Chupke Chupke, but not as funny.)

Pawan has some cool action scenes.  (Evidently he’s a martial arts expert in real life).  Of the two heriones, Samantha is given nominally a bit more to do.  It’s not her best role ever — she’s improved considerably in the years since this film was released. 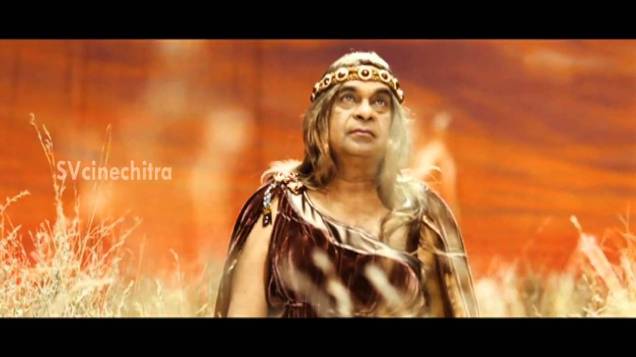 Brahmanandam has a lengthy cameo.  I can only take him in small doses, and it was TOO much.  However, at one point there is a Gladiator reference that is hilarious.  I didn’t need the half hour preceding it, however.

So, Attarintiki Daredi is an average family drama, elevated by Nadhiya’s performance.  I know Pawan Kalyan is supposed to be a Telugu cinema superstar, but he really doesn’t do much for me.  His signature is his dialogue delivery, and it just doesn’t come through to me, watching with subtitles.