I just watched the teaser trailer for Sanju, and my mouth is hanging open in amazement.

Rajkumar Hirani is the same director who made Munna Bhai MBBS and also blockbusters like PK and 3 Idiots.  This trailer is simply genius, and I love how Ranbir breaks the fourth wall and talks right to the audience.

I am blown away by the makeup and how Ranbir carries himself just like Sanjay.  We have 2 months to wait, until June 29th.

Here’s the trailer so you can see for yourself just how well Ranbir Kapoor pulls it off:

I went to the first day, first show, at my local theater and they were NOT prepared for the Diwali crowds.  The theater was pretty full, and there was a long line at the ticket window.  Interestingly, I was not the only non-Desi there.  There were two women who were fans of Aish from Bride & Prejudice, but didn’t even know what the title of the film meant or who SRK is.  (!!!) 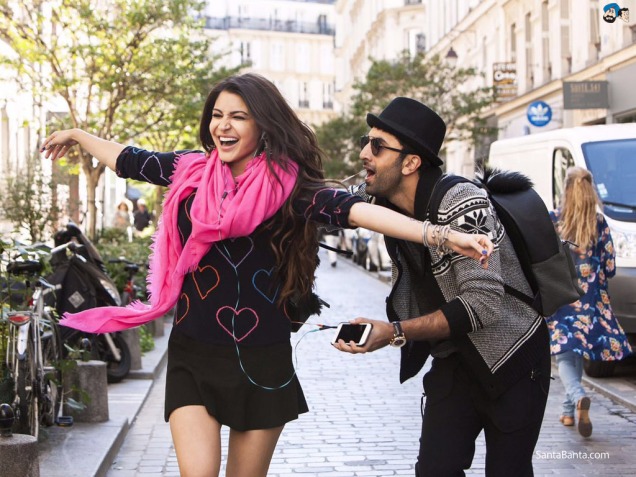 Anushka and Ranbir meet when they are both fighting with their boyfriend/girlfriend.  They kiss and Ranbir sweetly hugs her, and Anushka pulls away.  “What kind of kiss was that?  Save those kinds of hugs for your family!”  There is no sexual chemistry from her side, but they are soul mates in every other way.  They both love old 80’s films, quote dialogue to each other and sing old song lyrics to each other.  I caught some of the filmi references (like them doing the Kuch Kuch Hota Hai finger to the noise bit), but there were many I didn’t catch.  (Can’t wait for Margaret to do a full summary on Don’t Call It Bollywood where she can instruct me on all the ones I missed!)

We knew about the Shahrukh Khan cameo as Aish’s ex, but there are some other fun ones.  Alia Bhatt and Lisa Haydon!  Fawad Khan’s role has been cut down so much that it’s not much more than an extended cameo. 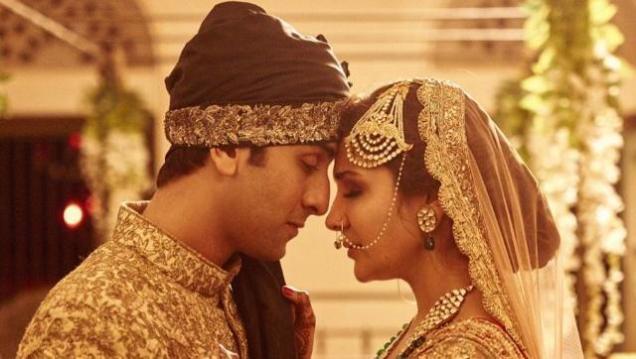 I wish the songs in the film had had subtitles, because I felt like I was missing meanings from the lyrics now that I was seeing them in the film itself.  Anushka is his friend, his best best best friend, but we can see that Ranbir wants more.  He declares himself after she returns to her former love, but it’s too late.

Then he has the passionate relationship with Aish, and I loved her as this mature seductress!  She and Ranbir had great chemistry, and the cameo with SRK was a delight.  Shahrukh and Aish just give off that old lovers vibe and it was perfection for this film.

There is a twist in the final 15 minutes or so of the film that I mentally said to myself, “Oh, Karan, really, you’re going there?”  But damn it.  Karan made me cry!  It was predictable, but he played my emotions like a violin and the tears were running down my face.

The music as we know, is just sublime in this film.  The title track and the way Ranbir perform it is so amazing.   Really his performance through the film is excellent.  But I was most impressed with Anushka.  She just gets better and better with each film.

Anushka criticizes Ranbir’s singing in the film (he wants to be a singer) and says he can’t really sing with emotion until he’s experienced heartbreak.  And that, I think, is ultimately the message of the film.  Great art, be it film, music or poetry, comes from heartbreak and pain.

I liked Wake Up Sid more than I thought I would.  To be honest, the story is a bit too close to home, as my son has graduated college and is trying to find his way in the world.

Ranbir Kapoor is Sid.  He’s a rich Bombay kid who flunks his college finals.  Anupam Kher is his father (who else!) and tells him he has to go to work in the family plumbing fixture business.  When he walks out, Sid and his father have a huge fight and he is kicked out of his family home, his credit cards canceled.

Sid can’t think of anywhere to go than to the apartment of his new friend Aisha ((Konkona Sen Sharma).  I think Aisha was supposed to be 27 and Ranbir much younger as he was supposed to be a college graduate (maybe 23?).  Anyway, it’s unusual to have the woman be older in any Bollywood relationship so brownie points for that.  Aisha is new to Bombay and starting a new job and an independent life.

Sid learns all the real life skills that he has had no clue about in his sheltered life, like laundry, fixing up an apartment and cooking an egg.  Sid has a passion for photography and ends up getting a job at the magazine where Aisha works.

It sounds trite, but the script is actually pretty clever.  This is the debut feature film of director Ayan Mukerji who also wrote the story of the film.  He won the Filmfare best debut director deservedly.  Wake Up Sid was quite the success, and his second feature is the mega-hit Yeh Jawaani Hai Deewani.  His films both have characters and situations that while filmi, still feel grounded in reality, aa specific young urban reality.   (I’m a little leery that his next project is reported to be a superhero film, also starring his muse Ranbir Kapoor, Dragon.)

The romance evolves organically.  They’re just friends at first and sleep on separate pallets in the same room.  Aisha tries not to fall in love, because Sid is at first such a mess and so purposeless.  But this is charming Ranbir after all, she has no chance.  Once he reconciles with his parents upon getting his first magazine job paycheck, he moves out, and that’s what makes both of them realize how their feelings have changed.

Fortunately, the film doesn’t just focus on Sid and his travails.  Aisha gets her own storyline with an almost romance with her sophisticated jazz-loving boss.  It was nice, frankly, to see Konkona Sen Sharma get a juicy big part like this in a romantic film.

My feelings about this film are just tinged by the fact that I’m living this right now with my own son.  So it’s not exactly escapist fare for this mom.  Sid only took about a month to wake up.  Sometimes the process is longer.

Still, I think the director is fantastic, and I look forward to all his future projects, even if he makes Ranbir a superhero (gulp!)

Four stars out of five.