Here’s a roundup of some of the latest Telugu trailers.  I think I’m most looking forward to Chay Akkineini’s newest film.

Rana Daggubati is center in this trailer for what may be a web series.  Looks like a cross between Mr. Robot and Scandal:

Mahanubhavudu starring Sharwanand and Mehreen Kaur, directed by Maruthi.  I like this nerdy persona by Sharwanand, an actor new to me.

Ravi Teja in Raja the Great:

So many trailers came out last week!  Here are my reactions to four of the new films that I’m looking forward to seeing.

Any new movie from Dulquer Salmaan is one I’m looking foward to seeing.  After I posted this, someone commented that the film is an anthology and Dulquer will play several characters in the film.  This is just the first character, Rudhra.

Bhoomi shows Sanjay Dutt as the father of his daughter Bhoomi.  No subtitles but I get the basic gist that this is a revenge story.  I’m looking forward to seeing Sanjay play a father role.

Simran is the “maid” picture that was filmed in the States.  What I just learned is that the director Hansal Mehta is the same one who directed the fantastic Aligharh.  No subs, but it looks super quirky!

Finally subtitles, although they don’t show up in my reaction.  This is just a teaser for Chay Akkineini’s latest film, but it looks exciting.  Chay is definitely a great action film actor, and I’m enjoying following his career.

Rarandoi Veduka Chudham (Come, Let’s Watch the Spectacle) is an enjoyable family drama starring Naga Chaitanya and Rakul Preet Singh.  This I believe is their first film together, and the first time I’ve seen Rakul in a film.

This film is put out by Naga Chaitanya’s family banner, and he did well in the film, but frankly, I enjoyed his 2016 films Premam and Sahasam Swasaga Saagipo much more.  The first half of this film is slow, but it’s saved by the last hour or so of the film when the conflict comes to a head.

Serendipity smiled down on me.  I’ve been so busy with holiday nonsense that I haven’t had time to watch movies much the last few weeks. 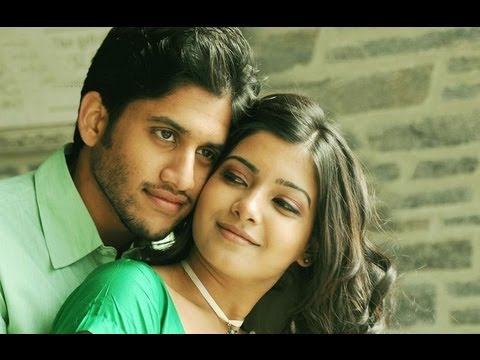 I actually have owned this movie, Ye Maaya Chesave (What Magic Have You Done — a very appropriate title) for months.  I bought it in a DVD bundle when I took a chance on a Bhavani DVD order.  Another movie in the bundle, starring Nagarjuna in King, I did not like that much and this other DVD got pushed to the back of the pile.  I was looking for something else this week and came upon it.  When I ordered it, I did not know either actor in that front cover pic, but they sure look familiar to me now!
This was Samantha Prabhu’s first movie! This was only Naga Chaitanya’s second film from 2010.  That’s why it was bundled with his father’s movie!  Evidently, it was a huge Telugu hit.  The director, Gautham Menon just directed Chaitanya again in that movie I saw in the theater last month, Sahasam Swasaga Sagipo   (FYI, if you don’t know Samantha and Chaitanya recently got engaged in real life.)
I will tell you straight out that both leads show that this is an early film.  There’s sort of a fidgeting to some scenes like they don’t quite know what to do with themselves — they don’t yet have that confident screen presence they do now. 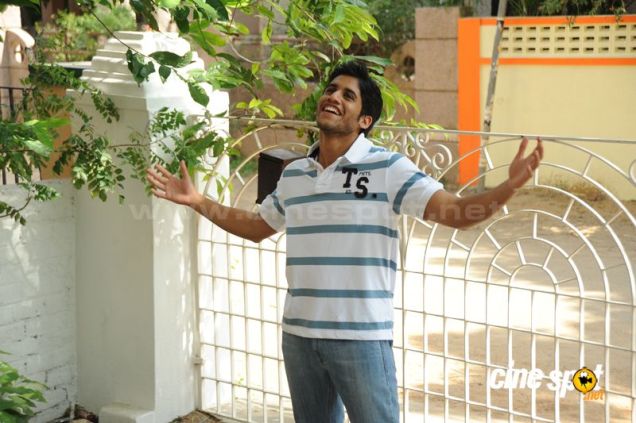 But there are a few scenes that are just pure magic! The awkwardness and how young they look fit with the characters.  Poor Chaitanya has got acne, and Samantha is so baby-faced!
The movie starts in a church and Jessie (Samantha Prabhu) is the bride, and Karthik (Chaitanya) is sitting in the pews with his head in his hand. “Why did I have to fall in love with Jessie?”  And, flashback for half the movie.
It’s young first love.  Forbidden love because she’s Christian and he’s Hindu.  He’s a jerk in front of her brother and father and they hate him.  But oh my gosh the young love is so sweet, but sometimes with a little edge to it.  Karthik wants to be a film director and doesn’t have a job, which on top of being Hindu does not endear him to Jessie’s dad.  Poor Jessie’s only been allowed to see five films her whole LIFE.  (Also, nice twist that the girl is two years older than the boy.)
Real life director, Puri Jagannadh (Pokiri), cameos as the director on whose film Karthik finally gets a job as an assistant director.
There are many twists to the story.  Karthik is a jerk and needs to grow up in the worst way.  Jessie needs to get a spine at moments, but then does so in spectacular fashion.  It’s one of those movies that feels both like a real complicated relationship, and also so filmi with moments for love songs that just sweep you away.
The ending is just filmi swoon inducing.  I had to play the last 10 minutes all over again when I finished because this one speech of Karthik’s at the end —  just the best.
The music is all A R. Rahman and is an awesome soundtrack.  This director films his movies in Tamil and Telugu at the same time — but with different casts.  I was absolutely tickled at the exotic locale for this fantasy song when he’s first falling — Princeton!!

I really loved how the song Kundanapu Bomma was edited into the film.  Karthik is having this fantasy of sweeping Jessie off her feet and taking her in his arms and kissing her.  And the action goes back in forth from the fantasy to the reality of his first tentative kisses, and then the slap he gets!  (I’ve marked the video about where that bit starts.) 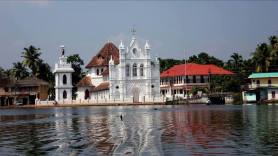 Evidently Samantha the actress is half Telugu and half Malayalam, and her character is as well.  So key parts of the movie are in Kerala.  The wedding scene with her bridal boat approaching the big white church is just stunning.  I got a kick out of fish out of water Telugu Karthik and his friend to make their way in Kerala.  “Guys in colored lungis are going to beat us up, Karthik, why do we have to go to Kerala?!” 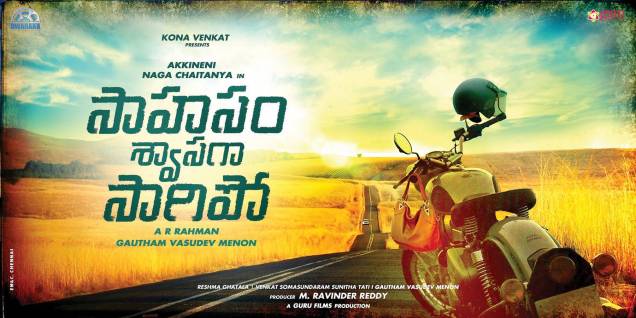 One of my followers suggested I try to catch Sahasam Swasaga Sagipo (Live Adventurously) with Naga Chaitanya in theaters this week, after he read my Premam review.  I’m so thankful T.J. told me about it before it was gone!  It’s the start of the hectic holiday season here, and I did not even realize Naga had a new film in theaters.  I caught the ONE showtime it played today, and it was pretty darn good.  Guarav Menon filmed it concurrently in Tamil with another lead actor, but the same lead actress.

I LOVE the film allusions right in the dialogue itself.  First there’s a title card that says “Inspired by a scene in The Godfather“.  It has been a loooooong time since I saw The Godfather, so I had to look it up when I got home.  It was the hospital scene.  That is key to the action second half.

The Godfather – Hospital Scene from Adelante Communications on Vimeo.

Another interesting thing is that the hero’s name is never revealed until the very end of the film, and it has a dramatic punch when it is revealed — And a touch of humor to it.  The heroine doesn’t even know his name until almost the end.  She jokingly puts his number in her phone under “Unknown”.

The first half is swoony innocent romance and the second half action thriller.  Sort of like how Kali had two very different moods to the two halves of the film, but here the romance is almost Premam level innocent and sweet.

There’s a prologue where we see a man and woman attacked in their home, and then we see our hero beat up 6 guys who had been harassing his sister.  “Stalking like that is so 80’s!”

He sees them approach backlit and there’s overlay voiceover that had me chuckling.

“Four men suddenly appeared approaching me like in a Mani Ratnam film so I knew I was in trouble.”  LOL!  He dispatches them easily and comments on how it was his first taste of violence.

Then the friend of his sister, Leela, moves into their family house for a few weeks, and they shyly say not much more than “Hi” to each other for awhile, and then gradually, sweetly become friends.  Naga finished with school and wants to travel before settling down, and plots to hit the road on his motorcycle with a friend “His girlfriend probably won’t let him go.”

Leela unexpectedly shows up when he’s leaving and asks to go with him.  I LOVED this.  That she asks to just be one of the guys and share the adventure, not be his girlfriend/lover right away.  They have a wonderful trip to Kanyakumari, the southern most tip of Tamil Nadu to see the sunrise.  It was spectacular scenery of a place I’d never seen before.

There is a really exceptional “I’m a good decent boy” moment in the romance.  For money’s sake, they book a hotel room in Kanyakumari with two twin beds.  When it’s her turn to shower, he offers to leave the hotel room so she’ll be more comfortable.

THEN the whole movie turns on a dime into a thriller. They should part, as she is due home in Maharashtra, and he offers to take her all the way home.  Their trip has been a secret from everyone.  Neither family knows they are together.

There’s a road accident, and then The Godfather moment comes.  It was her parents that were attacked in the beginning, and our hero rises to the occasion to protect Leela and her family.  The cops are corrupt, and there’s one particular bad cop that is their nemesis.  The action is pretty gripping and I didn’t know what was going to happen from one scene to the next.  Not quite the unbearable tension of Kali, but pretty darn good.

The final resolution ending is SO satisfying as only South Indian films can be.  They’re so violent, but there’s just a YEAH!! moment when the villain is vanquished and the hero is triumphant.

The lead actress, Manjima Mohan, was okay, but I am continually impressed by our boy Akkineni Naga Chaitanya.  Innocent romance he excels at, and he was very, very convincing as an everyman who rises to the occasion in the action sequences.  He was very good in the fight scenes.  I think the cinematographer was non-Indian, maybe from Hollywood because it was more of a Hollywood close camera work kind of style in the fist fights.

The music is A R Rahman which is always good, but it didn’t blow me away like Mental Manadhil from O K Kanmani.  I did really like this haunting love song which in the film is intercut with the road accident, which was a really interesting editing choice.  This slow passionate song –

So, T.J.  thank YOU for giving me another reason to be thankful this week of American Thanksgiving!

On a shallow note, I was also thankful that Menon gave us a few Naga shirtless scenes (he’s been working out!) and this particular shot.  😉